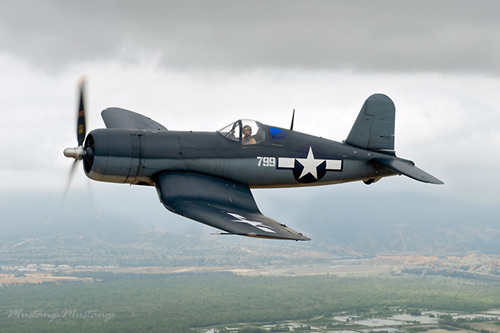 Each year, the staff at the Planes of Fame Museum put together a media preview to set the stage for the upcoming show. If the weather cooperates, this includes some air to air photo ops. (Yahoo!) I've been very lucky to be in the air with a P-47, P-38, F4U, P-40 and AT-12. I would like to thank Frank Mormillo, Mark Foster and Steve Hinton for those opportunities.

This year's theme, "Wings of the Silver Screen" will showcase some warbirds that have made it to the screen and the tube. The Corsair and P-40 have been used in movies and tv shows. John Hinton flew the P-40 and Chris Fahey strapped on the Corsair for our photo flight. The weather was less than perfect with overcast about 4,000 agl, but flying with warbirds on your wing is always a hoot. Both of these warbirds have combat history in WWII.

Steve Hinton Jr. was our photo plane pilot. I was in the back of the Baron, which turned out to be a great spot. There is only one seat in the back so I could shoot on both sides. The problem was choosing which side to shoot when the P-40 is on your right and the Corsair on your left. They switched half way through and I tried to click some of each on both sides. As usual, the shoot is over very fast as we put in one lap around the patch and the fighters left us for the other photo ship.

Stevo greased the Baron in and dumped us for some more photogs. He is a very nice young man and all the good things you hear about him are true.

Thanks again to Frank Mormillo and the Planes of Fame Museum!