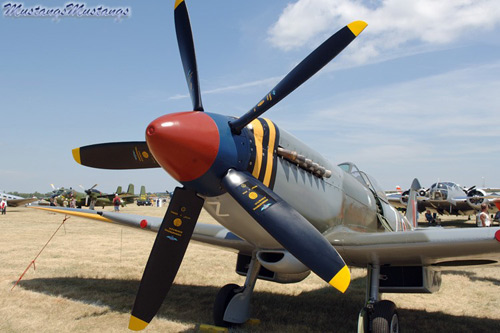 At EAA Airventure you can find almost all kinds of warbirds present from the fastest fighters to the slowest trainers. Utility aircraft, transports, bombers, recon and more. Props, jets, propjets, they are all here. Rare types, award winners and negleted flyers are parked on the grass and the pavement of an unused runway.

This year, I did not see as many WWII cats (Hellcat, Wildcat, Tigercat) as in other years. I did find one Bearcat. There were two Corsairs including an immaculate FG1D. This Corsair looked like a brand new restoration (I don't think they looked that good from the factory). If you were able to check it out, you know what I mean.

Another Grand Champion contender is Ron Fagen's P-40. Like the FG1D, better than factory new. There was almost always a crowd around this P-40. It is clean from nose to wingtips to tail to the rubber that meets the ground. Bob Baker (owner of P-51 "Sweet and Lovely") pointed out to me that the center drop tank is a US made paper tank! I wasn't even paying attention to that when I was underneath taking a few shots.

I actually did not show the shot underneath because I thought the tank did not represent the excellent work on the aircraft because it showed some surface imperfects. What a dope. Look at the seam, it is not welded like the others, but a bolted flange. Like Bob Baker's award winning P-51 "Sweet and Lovely", Fagen brought in the WWII tarmac with his P-40. Under the Tomahawk is some of the metal runway sections used to create working airfields in a short time. It worked for Baker, paper tanks and metal runway (oh, and a very detailed warbird too). Fagen's P-40 has a good shot at Grand Champion.