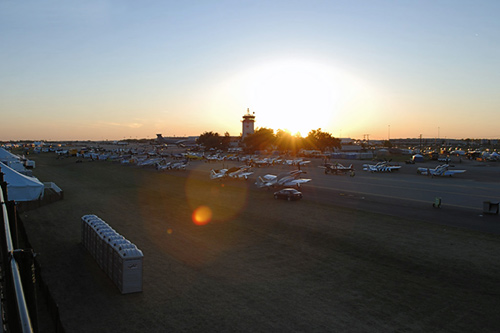 The famed P-51 ramp at Rickenbacker 2007. What a sight to see. Rows of P-51 Mustangs from the U.S., Mexico, Canada and even one from the UK. The aircraft seemed to be in a constrant motion with the photo hangar, airshow and photo missions operating during each day. Several shots of the ramp were void of Mustangs that were off doing something.

The ground crew never rested during the day. There was always a P-51 to be moved from the north hot ramp to cold ramp, cold ramp to photo hangar, and from the photo hangar back to the cold ramp. Lots of hours on those John Deere tractors. Also on the ramp were some bombers like the B-17 Flying Fortress, The B-25 Mitchell and a Lancaster. WWII fighters, other than the P-51 were also on the ramp. All the way to the south end of the airshow ramp you could see the USAF Thunderbirds lined up and getting ready for the days events.

The west coast group that I was with did not arrive unti late afternoon Thursday. The line of storms that cut the country in half kept us waiting to the west for the storms to pass through. They passed through and let a ton of rain down on Rickenbacker on Thursday.

Another west coast group was waiting in Texas, we were in Kansas, some more in Illinois. As the weather cleared on late thursday, the ramp started to fill up with Mustangs. I think they started with 25 or 30 on Thursday morning. By Friday the count rose to 76 flyers and a cool XP-51G project.

I heard someone say something like "when the sky stopped dropping rain, it started to drop P-51s". By Thursday night the ramp was looking good. Friday had a good crowd, just the right size. Plenty of folks enjoyed the show and you could easily get around and buy a Coke or water without standing in line for 20 min.

But on Saturday, the ramp was swamped with fans, owners, pilots and vets. People everywhere but all the folks I ran into were very considerate for photos and the like. Lots of Legends on the ramp Saturday telling stories, signing autographs and shaking hands. If you wanted to meet or see a Legend, just look for a crowd surrounding one of the P-51s.

One of the best times to take photos at the ramp was early am or early evening. Problem with the early evening photos was this: at 6pm the airport was "closed". A line of uniformed Police in their vehicles rode up and down the ramp with lights a flashin' and bullhorns a blazin' telling everyone to please leave the airport is closed. Hmmm, the light was just starting to get good for photos. For those who were still hanging out letting the traffic die down, this was not very welcome. For most all shows that I attend, people filter out on their own and only a few die hards stay late.

I hung out (not for the traffic, because I had a traffic free way in and out) but for the good light. About 6:15 pm the lighting was very nice. The weather was also perfect at that time. There were always some P-51s flying too. So you had good light, perfect weaher and cool sounds. If I were to leave it would be with me kicking and screaming (yes, I can act like a 2 year old when I need to).

The ramp is a cool place to hang out. You can still see much of the show from there. You cannot get the great vatage spots for the best show shots, but it is a good place to enjoy watching the show and then between acts, you are right there to in the middle of the ramp to continue your P-51 tour.