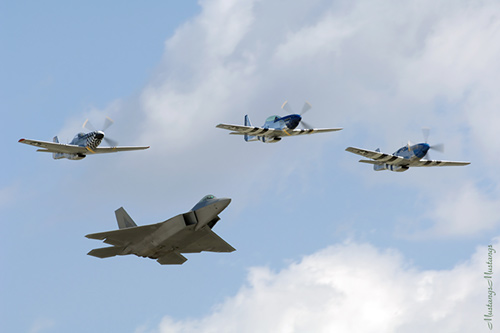 Geez, the gathering was huge, but there was also an airshow ... and a good one! The cool part about this show is that it featured the P-51 Mustang. Single-ship demos, the Horseman, Heritage Flights and the P-51 #51 flight were all part of the show.

The jet-jocks got there time as well with the F-16, F-15 and the F-22. They even had some aerobatics routines from some well-known airshow pilots and groups, but I have to admit I was not paying much attention to them because there was too much P-51 stuff to do.

Single ship P-51 demos were Lee Lauderback, Patty Wagstaff for the WASPS and Kermit Weeks showing off his red tail for a tribute to the Tuskeegee Airmen. Jim Beasley and Ed Shipley combined for the famous "Horseman" show. Take a look at the Horseman video helmet cam on www.airshowbuzz.com and you will see just how good these guys are.

The Horseman is a routine that everyone needs to see. It is that good - smooth flying in the finest WWII fighter, the P-51 Mustang. If you did not get a chance to see it. You can watch some videos at airshowbuzz.

The USAF Thunderbirds performed their awesome show and the USAF Demo Teams also got into it. The F-16 Figthing Falcon, F-15 Eagle and your newest USAF fighter, the F-22 Rapter. The Raptor is simply an amazing aircraft. Thrust vectoring can put the aircraft through stuff that will have you shaking your head like loops that look like flips. With its stealth technology and its awesome speed and turning capabilities, enemy fighters do not have a chance.

Saturday, they launched a twenty-ship flight that was spelled out "51" in the skies over Rickenbacker Airport. That sounded sooooo nice. Sunday was going to be the massive 51 P-51 flight, but it was scrubbed. I guess there were not enough formation-qualified pilots on hand or something like that. So there was a bit of a let down and we "only" got to see a twenty-ship flight and then the number "51" flight of twenty P-51s.