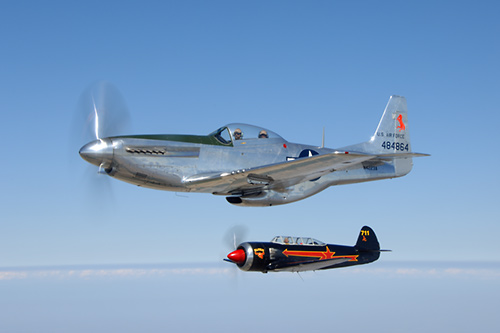 The Trip Back to Hollister
story and photos by Curtis Fowles

What a day Friday was. Can Saturday possible match Friday? We will see. I was told to meet in the lobby at 8am for breakfast. If there is one thing I have learned from being around Mr. Dan Martin is that he is more impatient than I am. I am ready to go 7:15 and chillin in the room. I get a knock on the door "thump thump" guess who? Right. Good Morning Dan. "Let's go to breakfast, you ready"?

Breakfast was good, now out to the airport. As we get out of the truck, oh wow, it is windy and cold. I was not bad back at the hotel in Bakersfield. Anyways, clean up the P-51, start with a duster brush. Gees this is not working. The dust is accumulating faster than I can dust off. Switch to guns (I mean bug cleaner). That's working but the P-51 is still dusted out. The wind is kicking up dirt and blowing it on all the show planes, cars and crowd. We are on the east side of 35 and the wind is coming from about 290 and coming hard.

Do I even want to get my cameras out? I'll wait for a bit, as I shove them back in the left gun bay after I finish bug detail. I ask if there is anything else I can do and my master says no it's a lost cause. Alright, time to roam around. He's got a pilot briefing, I'm gonna check out the line. Grab the dzus driver and get out the camera, keep your coat on it is still cold. The announcer is trying to convince you it is not that cold and it will die down later. I laugh and move on.

This is not a huge show. Vendors are setting up, fans are lining up at the show-line rope with their chairs, sun shades and cameras while being hit in the face with some dusty wind. The sun is out but the sky is hazy and dirty from the blowing dust. As the morning wears on the temps rise and wind falls to acceptable levels. For a while, they could not launch the hang glider or the jumpers. Rob Harrison had a fun time getting his taildragger down on 30 after his morning show around 11:15.

The show goes on but they had to shuffle some acts because of the wind. Around 14:30ish we start moving fighters around the cold ramp over to a hot ramp area on the southside of 35. I stay close because I've almost been left by Dan before and I'm not hitching for a 3.5 hr drive home. There's some bickering about the location of the fighters and who is going out first and who's on second and that kind of stuff. It gets sorted and we wait for our turn. The weather gets better as the day rolls on.

A bit of caution. If you are ever lucky enough to ride with Dan Martin, just remember when you hear "get in we are going", do not hesitate or you will be watching the famed red nosed Ridge Runner from the ramp, OK? Dan was not going to land after the fly-bys so I was lucky (more like LUCKY!) enough to tag along as "safety observer", hey ... the more trained eyes the better ;)

We taxi out as a flight of four - Getch in the Sea Fury, McKinley in Straw Boss, Dan Martin and I in Ridge Runner and Carlomagno in the black Yak-11. Behind us are more P-51s, Tarditti, Coutches and a Corsair. The Hellcat and Zero just landed after beating each other up over Minter in front of the crowd.

Once airborne, we form up around Getchell in a diamond - McKinley on the left, Martin on the right and Carlomagno in the slot. After the first pass we shift to echelon right, we are number three. Then came the single passes. Each fighter to do at least two passes. If you have never seen Elsworth Getchell perform fly-bys for the crowd, well, you need to. He sets up for a final approach at 2,500 feet and a mile out. Cool, because we follow. I am observing and everything looks good to me :)

Bannana pass #1 is done as we play follow the leader around for the last pass. The G forces hit slightly as we level off after the shallow dive. We a heading about 320 on runway 35, so a bank right and perfect photo pass for the crowd - Yee Haa! Bummer (if I'm allowed to bring back that word) we are done and heading for home. Getchell and McKinley land to refuel, but we continue climbing to the northwest.

We are all alone climbing for smoother, cooler air. Then I hear something on the radio. Sounds like someone is trying for form up? Oh yeah, but who? I hear "I'm 2 miles in trail a bit on your left", then a few minutes later "I'm off your left wing". I look, don't see anyone, must be below and blocked by the wing. Dan rocks his wing and there he is a shiny black Yak flown by Kent Carlomagno out of Half Moon Bay.

He's into the sun but I snap a few shots from my black box. Dan has reached our cruising altitude of 8,500 and levels off. We walk away from the Yak so Dan has to pull back on the large handle on his left. Carlomagno forms up nicely. Then the radio sounds off again "Dan I'm coming up on your right". It is Steve Coutches in the polished P-51D with a tall tail. Steve moves up on our right wing. This is pretty cool, a Yak on the left and another P-51D on the right.

After a few minutes and several clicks of my camera shutter go by we ask Carlomagno to move over the right side and form up to Coutches (on the good light side). The sky is a bit hazy, but the flight looks so good. The air is glass and temps are cool contributing to an awesome flight. The flight went so fast and soon it was time to break off for Hollister. Coutches is going to Hayward, and Carlomagno to Half Moon Bay.

We break left and strike a bead on Hollister, now about 240 degrees and 25 miles. Dan called in for the overhead approach as we hope that the Cherokee and glider get off and out of the way by the time we break. They are on the move as we come over the fence, no other traffic in the pattern. Another great landing and we are off we runway left. Taxi, shut down, tug and done.

To answer the question I posed at the top of this page, YES! Saturday could match Friday in the great day catagory. What a feeling it was to drive home after such a super weekend. After coming home my wife asks "so, how was it", "fine" I say. Fine? I am not sure it was me that was able to do all that great stuff in a short day and a half. But I have the images burned into my 8gb memory card to prove it! It was me, and it was ten levels beyond fine. I am sure there's a word for it ... and when I think of it I will surely tell you.

This awesome experience would not have been possible without Dan Martin. Thanks to him for inviting me! Thanks also to Getchell, Mike McKinley, Terry Tarditi, Kent Carlomagno, Steve Coutches, the Warlock Crew, the Goss' and Tiger Destefani.