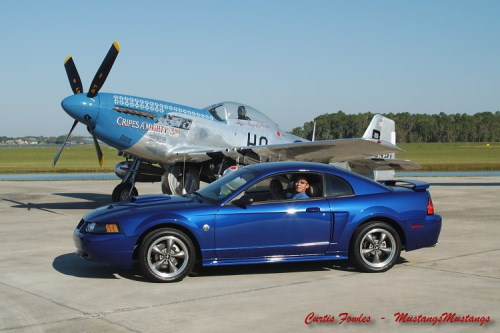 2004 is off to a good start. The shows are coming and the first one on my list of "gotta get there" shows is the 7th Annual Mustangs & Mustangs show in Polk City, FL. Yea, I know the name is kinda catchy. Over the years you have seen the two famed classics side by side for brief photo shots, but now you have MustangsMustangs.com, this web site which is built entirely on the backs of the Ford and P-51 Mustang and a large show event, Mustangs & Mustangs, dedicated to the same but in a more physical presence.

The show (6th annual), put on by Imperial Mustangs of Polk County, is well organized and full of top quality cars and aircraft. It is held at Kermit Week's Fantasy of Flight in Polk City, sunny Florida. The show is in early April of each year, usually before the Sun 'n Fun airshow in Lakeland FL. Plan on a day where you see these classics side by side and enjoy the company of many other mustang enthusiasts.

For 2005, the show is changing. MCA, Mustang Club of America, is getting involved and it is moving to a three day event! Yes three days. The show starts on Friday, April 8th and ends Sunday April 10th. Check out the Event Web Site for up to date information. They will have many events throughout the weekend to keep everyone happy. Stuff like biplane and balloon rides, Friday hospitality dinner, Saturday USO style banquet, WWII Reenactment, children's activity center and a Saturday outlet shopping trip for those wanting a break. This will be a great show. Start wiping down your Ford ride, get the registration papers, fill them out and send them in. You will not want to miss this show.

For 2004, they had a great display of Roush Mustangs, just begging to be driven, surrounding the Ford Tri Motor as you came outside from the museum. One either side of the Tri Motor, was Kermit's two P-51s. "Ina the Macon Belle" to the left and "Cripes A Mighty 3rd" to the right. If you signed up, you could drive you car out to the P-51s and get a picture of them together - great idea. Throughout the morning, lines of Ford Mustangs were taxiing over to the P-51 for their shot. In all, over 100 Fords were photographed with the P-51 Mustangs.

After that, you park your mustang over on the grass show area for display. As you can see, lots of great mustangs to browse through. The show was a one day event and there is plenty to see and many friendly mustang people to talk to. Kermit Weeks put on a brief forum for the P-51 and after that was done, climbed into the P-51C and took to the skies. He did a great job handling a crosswind that is blocked by some trees just when the P-51 gets close to take-off speed. He performed a few fly-bys and came back for a nice landing on the grass strip. Kermit performed in the P-51C twice during the day.

There were 2 P-51s on site this year, both owned by Kermit Weeks. There are usually more, but a few were down for some maintenance during that week and they could not make it. I was looking forward to seeing Ed Lindsay's Cavalier again, but he was doing an engine change during the week of the show. Hopefully, in 2005, he'll be back.

Interestingly, the show started the same year that we at MustangsMustangs.com came online with our name, 1997. I know that we had not heard of their show, and they could not have heard of our name in time to plan an event as cool as this one. We are not affiliated in any official way with this show as yet, but have common interests. Both starting in opposite sides of the US, both focusing on on differing mustangs while promoting both. MustangsMustangs.com does tend to lean toward the P-51 Mustang with respect to web site content and bandwidth. We are not the largest Ford web site out there, but are clearly the largest and most traveled P-51 site. Imperial Mustangs is a Ford Mustang Club that has different club events throughout the year. This Mustangs & Mustangs show is one of the participant's favorites.