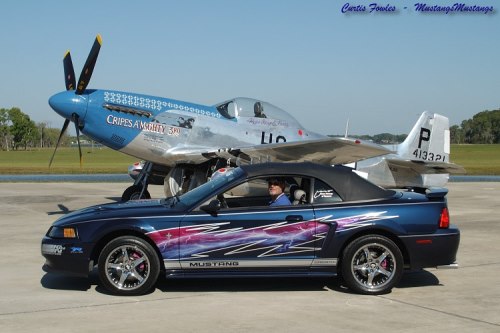 First thing in the morning, is the Mustangs & Mustangs shoot. Sign up, then follow the directions and your car (a finely tuned Mustang) will pull up along side the classic fighter of WWII, the P-51 Mustang. A few seconds in front of the P-51 is all you get 'cause there's lots of others behind you. A few shots by event photographers and off you go into the display area. Everything went smooth. I could not decide between the two lines of Mustangs & Mustangs because I did not want to miss anything. So what I did is wait for a little break in the line I was working, then run over to the other line and shoot there for a bit and back and forth.

What the staff does behind the scenes is kinda cool. They print out a pic of the digital shot of the Mustangs, then mount it on a plaque, install a plexi-glass type of cover over the print and hand them out at the end of the day. They were nicely done. I flew to Florida and rented a real lousy car, so I did not get one ... wonder if they have any '05 Mustangs at Hertz this year? We will check that for sure. So this year, you have no excuse, get on down to Polk City and enjoy the weekend of P-51s, Fords, and Mustangs.

They had 1 line that split up by chance and sent you to "Ina the Macon Belle" or to "Cripes A Mighty 3rd" for your shot. Photographers were ready and the staff was directing you when to stop so the picture would be framed correctly. I went back and forth taking shots at both P-51s, but mostly at "Cripes A Mighty" because the background was cleaner with no distractions. The weather was great, sunny and 70's, just perfect. The lake and trees and grass strip make a very nice backdrop for the shot by the blue-noser.

Both of Kermit's P-51s are award winning restorations by Art Teeters from Salinas, Ca. Salinas is about 30 min drive from my house. I was able to watch the full-power engine runs of Cripes before the first flight and see the first flight. I was also very lucky to be flying around in a T-6 when Cripes came up along side us by surprise and I was able to burn a few frames. With the drop tanks, "Cripes a Mighty 3rd" is a stunning P-51.

The red-tail P-51C, "Ina the Macon Belle" painted up as the former ride of Lee Archer, famed Tuskeege Airmen, is a sight to see. I was only able to see this P-51 once during the restoration at Teeters' shop. The fuselage was almost done and they were working on the wings. Art Teeters is working on a razorback for Jack Roush now which will make 3 P-51s for his squadron.

The Ford Mustang before the "Mustang" was picked as the name had several names they were throwing around. The Mustang was picked and the popularity and success of the P-51 was one of the reasons it was chosen. Of course, that was a very profitable choice for the Ford Motor Company.