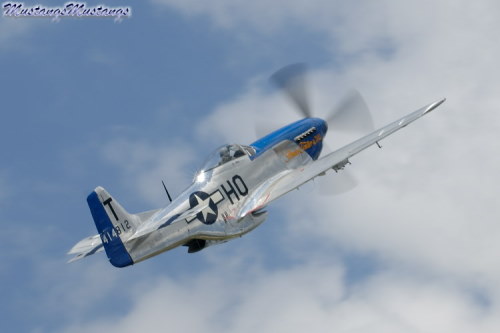 Last year at the Mustangs & Mustangs show, Kermit weeks performed in the P-51C a couple times on show day. I was looking forward to that again but Kermit broke his leg just a short time before the show this year, so he will not be doing any flying for a while.

Luckily, there was a P-51 in the air on all three days of the show. While changing some photo gear out in my rental car during the late morning of Friday, my head popped out as that oh so sweet familiar sound of a distant merlin getting closer. Looking around I can see a P-51 in the distance. A quick pass and pitch out 360 for landing was performed by a red nose. On short final, after scrambling to get the right gear out, I could see it was Dave Marco in 44-74458, "Sizzlin Liz", N351DM.

Marco and his g.i.b., stayed for a while and then took-off after Kermit had a brief forum about the P-51 to a small gathering. Marco came by for a couple of photo passes and then departed the area.

Saturday was another beautiful day in Florida. Again, as I am checking out some very nice 4 wheel mustangs, my head instinctively lifts up and turns as I hear a twelve cylinder merlin approaching. Looks like a yellow noser this time. A yellow noser with the light blue camo. Which one? There's a few like that - I can't tell. They land at the other end of the field and taxi over.

It is 44-74976, "Obsession", N651JM, P-51 owned by Jeffery Michael. After a few hours or so, Michael performed a pre-flight check and mounted the beautiful P-51. His take-off was very nice. He kept it on the deck as the gear cycled upward with the port side leading the way. Passed right be Bill Scheuerman and I. Bill got a great shot right along side us ... I got a fence post in front of my shot. Bill's shot is awesome, it is on this page. We spent some time chatting. Thanks for wasting some of your time with me Bill. You can check out some more of his pics here.

During Sunday, I thought we were not going to get a visit, but wait, I can hear ... yes ... it is a merlin. This time a polished blue-noser is coming. It is "Slender Tender & Tall", N51DT, owned by Thomas Blair - except this time Lee Lauderback is flying her. Lee was over in Tampa doing the Heritage Flight and thought he would stop by on the way home. Again, Kermit held a brief forum near Blair's P-51. Lee Lauderback then checked everything out and started up and taxied down the turf runway all the way to the end by the freeway.

Lee came towards us and once off, he held her close and brought the gear up. Still very low as he crossed the show area, he then pulled up into a very nice climbing turn. One pass and he was gone. Just a very short hop to Kissimmee, where he and his crew will tuck this polished beauty away in the main hangar. We were able to see 5 different P-51s at this year's show - very nice. More is always better, and we had more than last year, so that is good. This show is the weekend before Sun 'n Fun, so maybe we can get a few P-51s to come a little early and stop by this show. It is a great time.