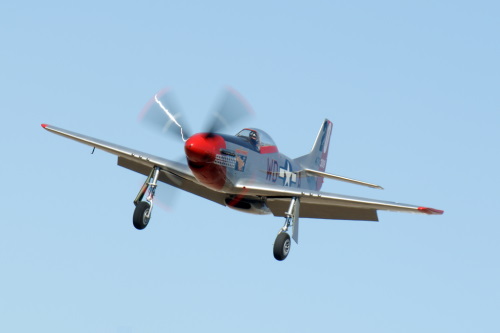 written before the start of Reno

2005 will be an exciting year of unlimited racing. The famed modified P-51 racer "Dago Red" has retired (bad Dago!). That opens a spot at or near the top for many hungry gold unlimiteds.

Good news is that "Strega", another highly modified P-51 is returning to the races after a few years off (nice Tiger). Curt Brown will do the flying for Tiger Destafani's champion racer. Stega has also won several times in the past. Tiger was at the controls for most of those years prior. Strega's last few years were hounded by mechanical problems with 2 DNF's on Sunday's Gold Final. This year, they have a couple of racing merlin's on hand and are ready to jump back into that 8.4 mile race course.

The "Bear", as it is nicknamed, will not go down without major kicking and screaming. They have done several modifications to the Bear for 2005. It is unknown whether these mods will be enough to hold off Strega. These two are certainly the top favorites - both past multi-year champions. But racing is racing and things happen. There are a few very fast Sea Furies lurking on the tails of the top two and lets not forget about a certain stock mustang. Stock mustang? Get real! What are you talking about ... ? Well, it was stock in early July!

Dan Martin in "Ridge Runner III", Race 20 is that said stocker. But Dan is as competitive as they come and he will be hanging close to the top finishers in gold if everything holds together. That's the part of racing that is the unknown. Last year Dan was looking great, but the racing merlin's blower had other ideas when it blew the wrong way on Saturday. Dan had to pull out of the race. The Ridge Runner III crew and others worked all night to get the stock merlin back in for Sunday. They did it and Dan flew in the gold finals, enough for nineth place. A few years back, Dan finished 3rd, so he's been there.

Dan and his crew chief Mike Barrow have a few new tricks for this year. Last year he was able to post some speeds in the high 440's but they're hoping for more this year. Strega, Rare Bear and the fastest Sea Furies better not miss a beat, because a "stock" red noser will be waiting very close by. Stop by the Ridge Runner pits and say hi to Dan, but don't be surprised to find him elbow deep in grease and oil. He's been turning wrenches on that (and many other) P-51 for years.

Other P-51s like Bob Button's "Voodoo", Brent Hisey's "Miss America" and Ron Buccarelli's highly modified racer will be shooting for the gold race on Sunday as well. There was a 400+ time on Sunday's Bronze final by Joe Thibodeau in the P-51 "Crusader" at 409 mph. Don't know if Crusader has any new mods for 2005. Stu Eberhardt will not be flying "Merlins Magic" in 2005. Stu has been a long time racer at Reno. We hope to see him back soon. These were the only P-51s above 400 mph for the races in '04.

These mustangs have to be watching for all those Sea Furies (and don't forget last year's champion bearcat and a fast Yak). This year the field has 10 Sea Furies, 14 mustangs, 2 bearcats, 3 yaks, 1 wildcat, and 1 tigercat. Oh yeah, one of those mustangs is a P-51A named "Polar Bear", owned by Jerry Gabe from Hollister, Ca. Jerry has been working hard on his A model and Dave Morss will be flying her. She's got a new Allison V-12 up front and they were doing run-ups today. Contender?

This year will be exiting as racing this fast is always full of surprises. The sound and sight of nine 400 plus mph warbirds rounding pylons at 70-80 degree banks is enough to keep you smiling. They cover the 8.4 mile course in just over one minute and they never have their wings level at those speeds. Come by and get hooked.