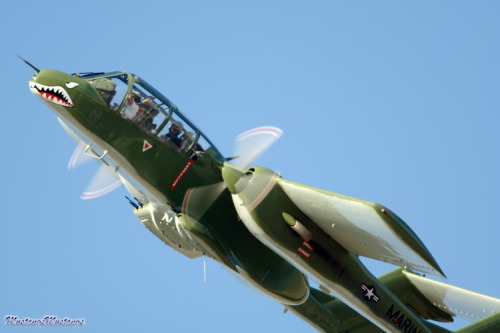 The Reno Air Race Ramp. During the day the race ramp if packed with racers coming in and out of the pits, run-ups, fueling, class start-ups and shut-downs. After the last race each day, the ramp changes a bit and hosts a variety of going ons.

You will still see engine runs, and test flights but you will be treated with some of the aircraft that are not in the races taking to the skies. The OV-10 Bronco in full Marine colours (oh that's so cool) went up in the evening. The pace T-33 with Steve Hinton at the controls usually goes up each evening. One time the T-33 went up to fly the wing of the OV-10 (no I'm not jealous).

I was waiting for the F-100 to go up ... but didn't happen. There was also an F-86 in civilian colours in the pits. Ike Enns, Rob Patterson and the Planes of Fame P-51 were all up in the evening - Art Vance too, all in their Mustangs.

Rare Bear and the Tigercat each went up to do some testing. Steve Patterson in his Sea Fury went up for a photo shoot (lucky Chris Luvara) drug his camera gear in Somes' T-6 for a perfect evening shoot. Many T-6s took off and did some formation passes. If you get bored at the ramp, there is still some action in the pits. The evening light is soft and warm (color temp) for nice photos.

Keep a jacket handy, cause as the sun gets lower, so does the temps and it still can be a bit breezy at dusk in Reno. When the sun sets, that's usually time to start heading out ... ready to do it all again the next day.