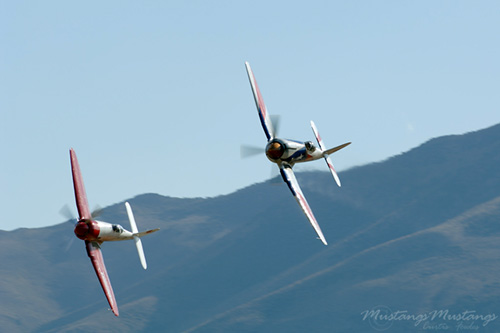 Mike Brown and his "September Fury" crew set a high standard in 2006. They ran fast and hard and showed no signs of weakness. Team Rare Bear struggled in '06 and finished the week early with a broken Bear. Rare Bear's future uncertain with talk of dwindling finances.

But, a major jolt for Team Rare Bear. After the 2006 races, the Bear was sold to warbird collector Rod Lewis. Lewis has the resources to turn the page for the Rare Bear Team and send them into a positive future. More good news when winning and trusted pilot John Penney rejoined the Bear for 2007. They have much work to do in the coming year (less than a year really). Struggling to get everything ready in time for September, the team worked very hard. With the paint barely dry, they are in for 2007, but with little time for testing and tweaking.

Here are the top Unlimited Qualifying results for 2007
unofficial

The Gold Heat 3A showed us some great racing in #4 and #5 positions with Stewart Dawson in #105 Spirit of Texas and Hoot Gibson in #99 Riff Raff tucking in tight for much of the race with #5 Bob Button in Voodoo high above and slightly behind them. Dawson, Gibson and Button finished with a total spread of less than .5 seconds. Sherman Smoot in Czech Mate cut home pylon and Strega dns.