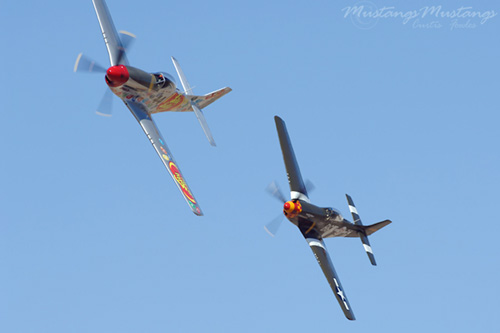 This year was fun to watch the Bronze class with some new additions:


Missing from the field was P-51D Ole Yeller - John Bagley. As you can see, the speeds are pretty close and provide some nice and close racing in both classes. Bagley and Mike Brown in his Tigercat used to fly some close races. In fact, I remember seeing some tight racing with Jimmy Leeward and Brown's Tigercat and also Merlin's Magic and Big Bossman.

Thursday's Medallion Heat 1C saw some killer low-level racing between Jimmy Leeward in Cloud Dancer and Fred Cabanas in Luscious Lisa. Only suprise in this Heat was Brent Hisey in Miss America was DQd for cutting the west deadline. The Bronze Heat 1B had three Bearcats, a Tigercat, the Super Corsair, a Yak and a Mustang! What a grouping. Bob Odegaard in his Super Corsair was DQd for cutting the runway deadline. The Silver Heat 1A (last of the day) was all Sea Furies and Ron Buccarelli in Precious Metal. Buccarelli was DQd for cutting the east guide pylon. This heat was the last racing of the week for Precious Metal. Stewart Dawson won the heat looking very smooth at 425 mph.

On Friday, all racing was suspended after the Formula 1 midair between Jason Somes and Gary Hubler.

On Saturday, Jimmy Leeward won the Bronze 3C heat after some tight flying with Brown's Tigercat. Fred Cabanas remained a pylon photographer's friend as he came by cutting the sage each time. That was fun to watch. Nelson Ezell won the Silver Heat 3B in #13 Fury even after the penalty for cutting pylon 6.

The Bronze final on Sunday saw the return of both Howard Pardue and Brent Hisey who both missed Saturday. Pardue won with a speed of 389 mph but gave up the finish to compete in the Silver.


Camp was fined for low flying (head below the top of the pylon!)

No safety problems during the Bronze or Silver finals on Sunday. Michael Brown had trouble with the Tigercat and did not race.


Once again Fred Cabanas took some killer photo lines coming around pylon 2. Thankfully we had a safe week of racing for the unlimiteds other than a few mechanicals. This year gave us an unlimited line-up that is hard to beat. All we need is a P-47, P-38, P39, P-63 and a P-40 to round things out. Well, I guess a Hellcat, Spit and Hurricane would be good too.