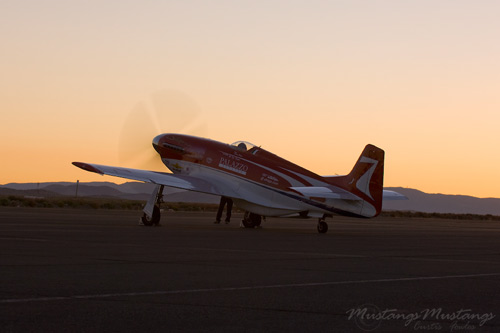 One small change from 45 years ago is the speeds at which they race. Engine builders and airframe specialists have come together and chisled away every mile per hour of drag and pushed these race engines to new heights. They know that the road to the biggest trophy on the ramp is steep and narrow. Most never get to the top, few do ... and some do it more than once.

This year we have three past Unlimited Champions (pilots) and five past Champs (racers) in the field. Two of the past champions have won mulitple times. You want the know the best news about that? Those three past champs all qualified in the top four and the top five racers are all past champs. Michael Brown won in 2006, John Penney has been champion four times and Tiger Destefani has found the winner's circle six times!

Who is the other top qualifier? None other than Dan Martin who hauled his stockish "Ridge Runner III" around the course at over 460 mph a few years back. Oh, and Dan qualified first this year. He and Team Dago Red have been working hard for many months and the hard work is showing.

The Unlimited Gold racers put on an exciting show this year. The four fastest racers, all healthy, all in Reno, all still in the top four come Sunday and all want to win! You can't write this stuff any better.

We all know about the unlimited racers with their mega-horsepower, great sound and fast speeds, but did you know that the Reno Air Races have other classes too (they do?) yes, they do! - biplane, formula one, sport, T-6, jet and the unlimiteds. They use four different course lengths according to the speeds at which they race. Race speeds ranged from 175 to over 520 mph! Course lengths vary from 3.1761 to 8.43 miles.


The weather during this year's races was fantastic with warm temps and light winds on all days except Tuesday, where the wind kicked up in the afternoon. This week was the best in many years for a combination of great racing, great weather and great fun throughout the week.