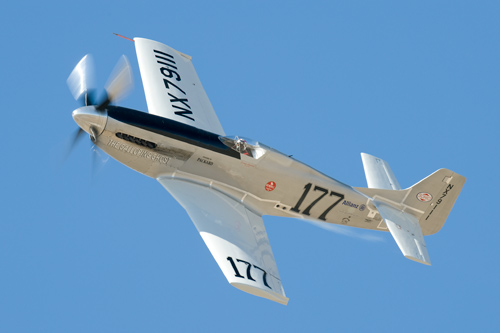 Another memorable year at the Reno Air Races. Thousands flock just north of Reno Nevada to Stead Field where they will fill their aviation cravings, all of them. The Air Races have speed, show, new and old all wrapped up in an awesome venue and display. If you like aviation, but are not a racing fan, the Air Races have plenty for you. What if you are a racing nut, but know little about aviation? You will be hooked when you see, hear and feel the power of WWII fighters on the deck at nearly 500 mph.

The weather? Nearly perfect. Only exception was Sunday afternoon where winds whipped up and created the race that never was. More on that later.

The Formula 1 and Biplane classes are up early for a 6:00 am brief followed by race preperations and races that start around 8:00 am. They are small, but they are fast and very competetive. Only the top Biplane racer the last few years is not seriously challenged. All other racing is tight and exciting. These racers use the smallest course measuring just over 3.1 miles.

The Sport class is for kit-built aircraft with less than 650 cu in engines like the Glassair, Lancair and Questair aircraft. They are fast, with speeds reaching around 350 mph. The Super Sport breaks the 350 mph mark and post speeds over 400 mph! Popular Super Sport aircraft are the Thunder Mustang, Nemesis NXT, Lancair Legacy and the Questair Venture.

The WWII training aircraft, the North American T-6 and SNJ comprises the T-6 class. Their course is 5.07 miles long and the racing is always close and very loud. There is only so much you can do to the T-6 aircraft and remain within the rules. The result is very close times and good race action for the fans.

Jets. F-16, F-15? No, sorry but that would be cool. Maybe in time. For now, no after-burning jet or wing sweep over 15 degrees are allowed. What is allowed are jets like the L-39 Albatross, L-29 Delphin, T-2 Buckeye, de Havilland Vampire, the Iskra and the Provost. The Jet class posts the fastest speeds ever at the Reno Air Races reaching well over 500 mph.

WWII Fighters, some with heavily modified airframes and engines fly 8 at a time around a 8.43 mile course at 50 - 150 feet above the Nevada desert reaching speeds of 500 mph. What an incredible year at the Reno Air Races with 10 differing types of Unlimited aircraft: Yak, F7f Tigercat, FM-2 Wildcat, P-51 Mustang, Hawker Sea Fury, Folke-Wolfe 190, P-40, F4U Corsair, T-28 and the F8f Bearcat. Yes, my friend, you are now in warbird heaven.

Reno in September can have very unpredictable weather with temps ranging from the 30's to 100 and the sky from a perfect bright blue to snow! This year, all that was needed to stay compfy was a sweatshirt in the morning and evening - the rest was shorts and tee shirts. The temperature was perfect, in the mid 80's. Packing for Reno is easy ... just bring it all, you might need it. It can range from shorts and no shirt to hooded parkas and gloves. Over many years of coming to the Air Races, I have worn all that and everything in between.

The Reno Air Race Association (RARA) handles the show extremely well for everyone. They have to keep the fans, the race pilots, the performers, the vendors, the support staff, the FAA, the local officials and most importantly us media types happy for an entire week! That is no easy job. I can say that as a media rep, the Air Race Media Operations Staff is fantastic. They do everything they can to help you get what you came for. They are mostly volunteers and work long days and are always willing to help. No other show that I have been to handles the media so well. Thank You!

Al Goss, a T-6 Champion and icon of air racing was lost in March 2010 when he and a friend went down in his T-6 racer "Warlock". Words cannot describe what Al meant to so many people at the Reno Air Races and in the aviation community. He will be missed by everyone. Al was a crop duster by trade logging over 30,000 flight hours in his career. He was one of the nicest guys you could ever know. The Wednesdy night Warlock party tradition was continued this year, but was missing the Man, the Legend, Al Goss. Those who attended raised their glass and paid tribute to Al ... Blue Skies and Checkered Flags.

Lyle Shelton pilot and owner for many years of the popular racer Rare Bear, was another legend in air racing. He was a six-time unlimited champion in Rare Bear. He first attended the air races in 1964 as a crew member and never looked back. Shelton first raced at Reno in 1965 flying a P-51D Mustang "Tonopah Miss". Shelton was another icon to air racing and will always be remembered as the man behind the famed Rare Bear.