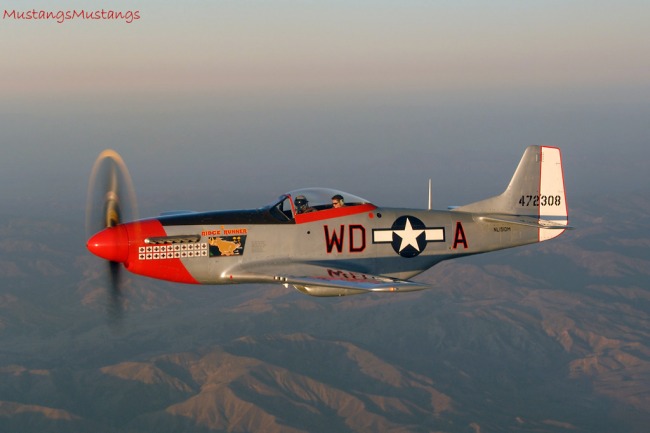 2000: Ran strong all week, with fastest lap speeds in the 430's. During the gold race on Sunday, the engine blew from a burnt piston sending Dan out of the race with a "May Day" for an early landing. He landed safely on the main runway.

2001: races cancelled after 9-11-01 attacks.
2002: Dan raced Brian Adams' "Flying Dutchman", stock p-51
2003: Dan raced Brian Adams' "Flying Dutchman", stock p-51
2004: Dan qualified at 446 mph, but he had more to give later. Qualified in the top 5, Dan did not have to race until Friday's Gold heat race. He finished 6th at 417 mph, just cruising. On Saturday, he cut loose and turned a lap or two in the 460's! but then bad happened and the blower case on the merlin gave way and he pulled out and landed safely. The crew had to work all night and put in the stock merlin just to finish the week at 304 mph in Sunday's Gold Final. He was hoping to finish with the race motor pushing him past 460, but the race Gods said not this time and question is: is there a next time?... Good qualifying time kept him in the Gold all week.

2005: Dan is racing again with a vengeance. This is as fast as a stock airframe has raced. He qualified in third at 442.9 mph not under full power. The speeds stayed the same for Fri and Sat heats, but on Sunday ... Dan puts the hammer down and passes Dreadnought on the pace lap! He is gunning for Rare Bear who is a few seconds ahead of Ridge Runner. Dan keeps pace and maybe gains a bit of ground on lap 1. Timers in the pits showed lap speeds in the 470's for Ridge Runner. But, the power was too much for the merlin and Dan called a mayday while on the backside of the course and is out. He safely puts her down on runway 14 and is towed back to the pits.

2006: Dan sets his P-51 Ridge Runner aside and climbs in the record-holding P-51 Dago Red. They have engine trouble during qualifying and more trouble when the #2 merlin makes metal on Wed. night. Dan does not get to race in 2006 but looks forward to 2007.

2007: most likely will not race, but will be preparing for the trip to Ohio for the Gathering of Mustangs and Legends!

2009: Return to Reno! Ridge Runner III, Race #20 will race at the hands of long-time owner Dan Martin. Good Luck Dan!
2009: Incredible speeds were put up by Dan this week. I cannot think of a stock canopy P-51 ever reaching these speeds. Ridge Runner III hit speeds in the 480s and finished with an average speed of 477 mph in the Saturday race!!! They finished 4th on Sunday at 457 mph. What a performance! In some years, 477 is fast enough for first place. Ridge Runner was a crowd favorite.

2010: Reno - Ridge Runner Team was in action early and will be very prepared for the races this year, until ... the Merlin spun a bearing just before leaving for the races. Argh!! Crew worked hard to get the engine redone. Martin qualified at moderate speed of 422 mph. After Friday's gold heat, they found metal in the screens and decided to stand down and enjoy the rest of the week. Martin flew Sal Rubino's Grim Reaper, a stocker, in the bronze.