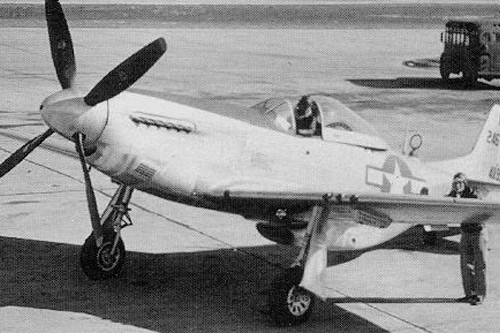 The P-51K Mustang was essentially a P-51D with a different propeller. With war production at max capacity in Inglewood, NAA added P-51 production at their Dallas Texas plant starting with the P-51B. The new designation of the B models built in Dallas was P-51C.

The propeller of NAA's choice was the Hamilton Standard 4-blade version used on the B, C and D models. Wartime production of these props from Hamilton Standard were not keeping up with demand and a suitable replacement was needed. Aeroproducts was contracted to supply the Dallas plant with their 4-blade 11' diameter hollow steel propeller. All P-51K versions used this prop.

The Aeroproducts propeller was generally not favorable to most crew chiefs and many props were not balanced well. Even so, they did the job at the time. The K model was able to get into the action instead of waiting on the line for more supplies from Hamilton Standard.

The Aeroproducts props are easily identified by the different blade shape. There are no cuffs like the Hamilton Standard. The blade gradually widens towards the center of the length and then is narrower out at the rounded tip. During the war, it was common to find a K model with a Hamilton Standard. In the field, such replacements of props and even engines were done with supplies on hand. Some K model Merlins (-7) were replaced with the older -3 version. Supplies on hand. With a Hamilton Standard prop on a K model, you would not be able to tell the difference between that K model and the D unless you read the placard.

The later version of the Hamilton Standard, sometimes called the "paddle blade" did not have the cuffs and had a fat squared tip. The standard cuffed version had a rounded tip.

There have been some that say that the K model canopy was different, but that has been disputed many times. More than once, I've thought some of the K canopies looked different, but it was explained to me that it was just a different mill run from the manufacturer, not a planned or designed difference. Others have told me (and I've read it somewhere) that they were different.