<< Case # 197
Who?   Case # 198
Case # 199 >>
P-51 Who? Viewer Responses
Bill Eaton
Dienert's modified D seated four under the T-33 canopy, according to a blurb and photo in a 1974-75 Air Classics "Warbird Report." The photo shows the airplane in a civil scheme with a stripe down the side. As I said, back in the mid-'70s Air Classics showed a photo of a 4-seater Mustang reported as owned by Canadian warbird collector Bob Diemert.

Another possible explanation comes from the 1996 Warbirds Worldwide Directory. This is A68-175, CF-WWH, modified by a Canadian owner sometime during 1967-71 as a 4-seater using a CF-100 canopy, yet Mr. Diemert's name is not in the ownership history. Perhaps Diemert performed the conversion? If this is A68-175, this airplane is now with Art Vance in Santa Rosa, CA, as N64824.

Note: The WW text also states that the id from A68-175 was transferred to a composite rebuild using parts from another Mustang recovered from an Illinois junkyard. The composite was rebuilt at Shafter, CA, 1975-82, and became Vance's "Million Dollar Baby." Art Vance has since changed the scheme on his Mustang, but I can't remember the new name. The new scheme is authentic to a specific WWII pilot.
MustangsMustangs
Correct except for the fact that this is not Vance's P-51. The '96 directory uses the FAA registration for the serial number, but paperwork was switched during the conversion.

Who is that P-51 now?
Joseph Scheil
This one is tough. Its hard to really say where all the parts went, but this is now the airframe that makes up "Slender Tender and Tall" N51DT...
Mike Vadeboncoeur
That is Slender Tender and Tall! You should have heard the Lauderbacks discussing the extra holes in the longerons when they restored the airplane for Dick Thurman. I am fairly confident that this is the four place/T33 canopy conversion that Diemert had done.
Tom Smith
I think this is 44-74950 which today flies as "Slender Tender & Tall"
Kevin Stubing
Back in early to mid 70s four seat mustang was owned by the late Frank Guzman and based at Westhampton Airport on Long Island (now Gabreski Airport). Frank said aircraft came from Canada. I am almost positive this was the Diemert Mustang. It was a real bizarre bird ...four seats in a row. Flew in it once. The memory (and the hearing loss) will last a lifetime. Not sure if the canopy was off a T-33... I seem to remember mention of a Avro CF-100 a short lived Canadian jet fighter. At the time Frank had a T-28 and a Temco Super Pinto TT1 Jet. The Pinto was a fun ride too.

At the time I was also helping out with another Mustang based at Farmingdale Republic Airport also on Long Island. This was a stock 51D 201F owned by Sandy Edelman & John Bosco. They also had a SNJ. I learned to fly a tailwheel in the J bird. Exciting and nervewracking. I put on a great show for the fence-sitters as I swerved up and down the runway. I wrote down the build # from one of the Stangs but I can't remember which one. It was an Australian bird A68-175fg, I later heard 201F was in a museum somewhere and the 4 seater was converted to a stock canopy after Frank sold it.
Zane Adams
I had a chance meeting with Mr. Diemert this weekend and he showed me a similar photograph of the four seater mustang that he built. He told me that it was a CAC (Australian) built airplane. He also said it was the the last Mustang that was built by CAC. The canopy was from a CF-100. He said that the airplane was damaged while being shipped to the US, the dock crew put a lifting hook through the cockpit, at that point it was damaged severely enough that the four place cockpit was an easy thing to do since the it had to be rebuilt anyway. From the horses mouth...in November 2008
Zane Adams
One thing to add to my last comment..The photo Mr Diemert had showed the name "Miss Behave" on the right side of the nose...
Bill
I was at the Santa Rosa airport on May 27th and saw a Mustang sitting in a field seemingly "abandoned." I wish I had taken a picture -- the wings are off next to the fuselage. It appears to be a WWII ace's plane because it had a dozen swastika's on the side. Anyone know about this? Any photos? Any history?
Allen Neufeld
If you would like to know more about the 4 seater Mustang in question, let me know. I see Bob Diemert almost every weekend.
Paul Janicki
I would love to know more please. Do photos exist of the cockpit layout? Are there any photos of the conversion being carried out? I notice there is some widening towards the rear of the cockpit. Do images of this area exist? And how was the CF-100 canopy made to fit?

I look forward to answers as I would like to make a model of this four seat Mustang. Thank you. 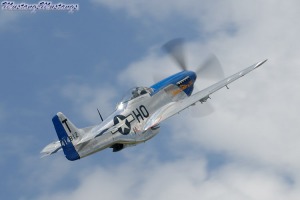