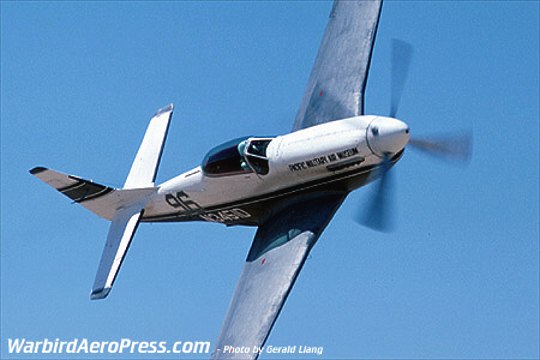 44-75007
1963 N5462V
1966 N3451D Trans Florida Aviation Inc, Sarasota Fl
1969 Tempress Research Co Corp, Sunnyvale CA
1978 to present EAA / Paul Poberezny, Hales Corner WI (Paul I)
Neal Nurmi:
This is Bob Love racing Jerry Brassfield's Cavalier, probably about Reno 1976.
This aircraft became Paul I when sold to the EAA. It's nice to see one I can actually solve!
Dick Phillips:
Case 208 is of course, N3451D 44-75007.
It had been N5462V when it went to Cavalier Aircraft for rebuild in 1963. It emerged from Cavalier as N3451D and sold to Tempress Research Co. in Sunnyvale, CA. Next Jerry Brassfield of San Jose owned it and put the name PACIFIC MILITARY AIR MUSEUM, on the cowl and raced it at Mojave as #96. I'd say your photo was taken in 1975. In 1977 it went to the EAA Foundation in Oshkosh, repainted into a "yellow nose" and carries the name PAUL 1, where it is still flying.
Chris McMillin:
I think this is Jerry Brassfield's airplane flown by Bob Love at Mojave in 1975-79.
Frank Chrstensen
N3451D was originally built for me by Trans Florida Aviation in 1968. I owned it through my company, Tempress Research, Inc. I sold it to Jerry Brassfiled who eventually donated it to EAA where it now resides. Flying it got me interested in aerobatics and led to the formation of my second company, Christen Industries, Inc. which produced the Christen Eagle and Christen Husky aircraft and sponsored the Eagles Aerobatic Flight Team.
Ron Burda
Bob Love flying Brassfield's Cavalier Mustang, now at the EAA Museum at Oshkosh in 2018. If picture taken at the Mojave Air Races, I'm in the backseat. Bob and I were close friends and went to most airshows and races together. I was a photojournalist for a large newspaper at the time.
Case Closed! 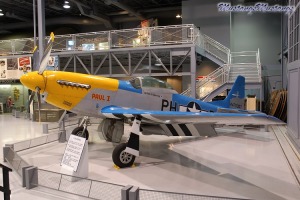