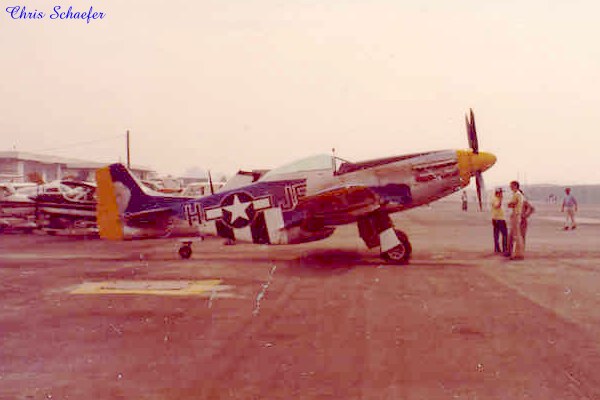 Here is a partial historical breakdown (to the best of my memory) of this aircraft.

1979-1980 Clark does away with white, red, and black civilian paint scheme. There is a "quick and dirty" paint scheme over bare aluminum (as in photo). He builds some hours in it before sending it in for restoration.

1980-1981 Clark takes it to Unlimited Aircraft for about a one-year restoration period. It also receives a new paint scheme over bare aluminum similar to that of "Big Beautiful Doll". It retains the name (on both sides of engine cowl) of "Unruly Julie".

1981- 1988 (approx.) Clark operates it for a few years until it is heavily damaged in a forced landing in a desolate area in AZ.

1988-1994(approx.) Aircraft goes back to Chino for repair of damage and a rebuild. It then suffers another forced landing on its first test flight after engine seizes due to an improperly installed oil line. It received substantial damage after landing wheels up in a corn field adjacent to the airport shortly following takeoff.

1994 (approx.) The late Bill Speers and a partner buy wreckage for parts, "paperwork", and a data plate for another Mustang project. Bruce Jennings buys completed project from Speers and names it the "Saturday Night Special." It is then acquired by John Barnett and based at Brackett field in LaVerne, CA.

Nathan Davis of Indiana purchased the aircraft from Barnett in 2001. It is currently based in Indiana.
Martin (Swiss Mustangs)
This therefore is P-51D-30-NA. delivered 15th November 1950 to RCAF (serial # 9223) where it saw service with Nos. 420 'City of London' (coded AW-J) and later 402 'City of Winnipeg' Squadrons; s.o.c. on November 1st, 1960, and was sold to Aero Enterprises but didn't get an U.S. registry. It was immediately sold to Milt Harradance when it became CF-LOR (11.60); many owner changes and also change of registry to N1451D (7.75) - rest of story see above.Martin (Swiss Mustangs)

Sorry - forgot to add the serial: 44-74446<br />
Jerry Wallace
I have a picture of my father in the cockpit of Unruly Julie when it was in phoenix.
Case Closed! 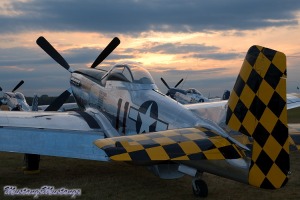