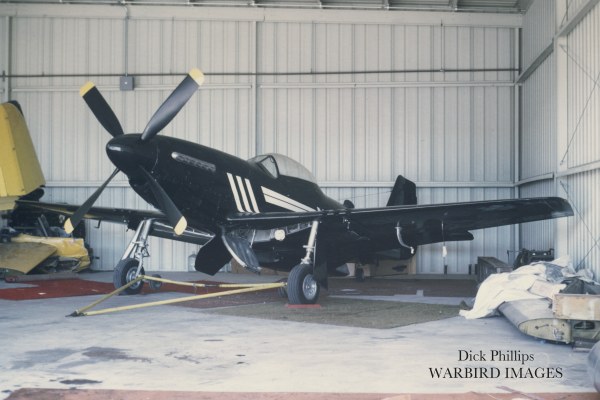 << Case # 226
Who?   Case # 227
Case # 228 >>
P-51 Who? Viewer Responses
Jim Church
This looks like N5448V (s/n44-74977) to me. There is a photo of it in this paint scheme on page 27 of the Winter 85/86 issue of the old 'Aero-News Photo' magazine (volume 11/ Number6). At the time it was owned by Mike Coutches, and had been reported stolen from its Tonopah, NV. base. Coutches offered a $50,000.00 reward for its return. It eventualy showed up abandoned at the Merced, CA. airport. It is now owned by Christopher Gruys, of Sante Fe, New Mexico.
Steve Richards
This Mustang at the the time of this picture which I would say is around 1997 maybe 98 As it sits in the photo taken at Hayward, CA (sitting next to a Bearcat) Belonged to Mike Coutches and was soon to be purchased by the present owner Chris Gruys out of Santa Fe NM. N5448V. I know this aircraft very well because my father attempted to buy it from Coutches back in 1971 I was fourteen at the time and have been in love with the A/C ever since. Love any Mustang for that matter. This is the same Mustang that was stolen from a storage site in Tonopah maybe mid to late 80's. It was being stored there because it was supposedly still being held for my father as he was trying to come up with the remainder of the note which was at the time $43,000. That's what was owed after a 5,000 deposit was given to Coutches from my father. My dad never was able to satisfy the note (hard times) and Mike just sold the airplane eventually, to his credit he tried to hold on to it for many years yet my dad never saw any of his deposit back that's for sure. I've since been blessed to fly Lady Jo and get front seat comfortable with Dan Vance but It's been a life long dream to fly 'ol 48V one day. Who knows maybe Chris will allow me the honor one day. Thank you for allowing me to ramble on a while, great web site guys.
Take care. Steve Richards
Curtis Fowles
Thanks Jim and Steve,I think you might be right, but I believe Steve's dates are not correct (maybe he meant '87 or '88 not '97 or '98) because Chris Gruys owned it in '94. I'm sure that Dan Martin would know, since he rebuilt 44-74977 for Chris Gruys.
Mark Lampe
I have flown with Mike numerous times. I flew in the 51H 4 or 5 times. What an incredible aircraft. One time I remember, we "buzzed Half Moon bat at 505 indicated. After that we pulled straight UP!! That aircraft is one in a million! But only 550 were made. After 700 hours in the air, I must say that was the best flight of my career.
Welrdelr
The Army P-51D-30 NA Serial No. AAF 44-74977N now belongs to Jon Gunderson. Along with a lot of other good stuff that belonged to Mr. Gruys Mr. Gunderson obtained this plane at a foreclosure sale. Jon is into restoring Dinos and has a lot of good stuff. http://www.youtube.com/watch?v=PTpMTyFshy0
John Majure
44-74977N is now owned by Dan Fordice of Vicksburg, MS. The tail number has been changed to N251CS. The a/c is based at KTVR a hangar down from where Chris Wood's "February" was restored.
Case Closed! 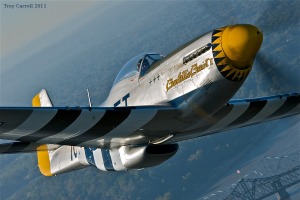