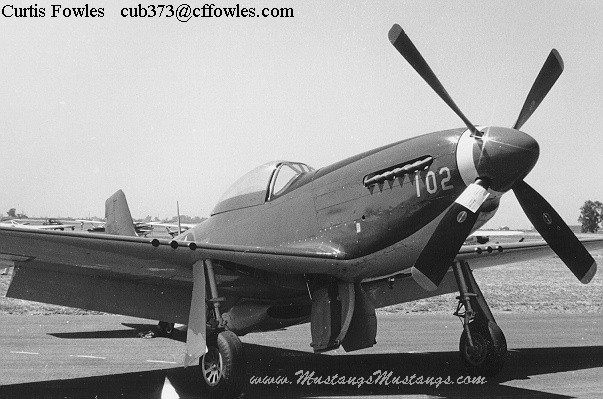 << Case # 24
Who?   Case # 25
Case # 26 >>
P-51 Who? Viewer Responses
Joseph Scheil
Daydreamer! 44-74458 An ex rcaf 9226 and then to Trans Florida Aviation. Several subsequent civilian owners until crashed 3/9/63. Wreck was resold several times and rebuilt at Compton Ca. by John Marlin. Sold in 1987 to Dave Marco and restored as Sizzlin Liz N351DM marked as 415326/ QP-H
Jim Church
This aircraft currently flies as Dave Marco's Sizzlin' Liz, from Jacksonville, Florida. It is s/n 44-74458, c/n 122-40998, and had last served operationally with the RCAF as 9226. The photo shows it when it was owned by John Marlin, who had it registered N65206 between 1973-88. The paint scheme at the time represented the first bubble top Mustang, which was actually a "B" model modified with a cut down rear fuselage. The aircraft was purchased by Marco in 1988, and he had it rebuilt and put into the 4th Fighter Group markings it still wears today. The restoration won the coveted Grand Champion award at the annual EAA convention at Oshkosh. It now bears the registration N351DM.
Dan Martin
That is Sizzlin Liz owned now by Dave Marco. John Marlin had it during the time of your photo and painted it olive drab.
MustangsMustangs
My black and white print didn't fool anybody. I had a B&W dark room in my first apartment in 1980-81. I had a blast doing my own negatives and prints. Took a lot of time but kept me out of trouble. I was just getting into color when we needed the room for a bigger family and I was finding out enough about color work that I didn't want to spend the money on the good equipment (not the time either).
Charles irvin
I remember this plane!!!

If I recall correctly, the late Fred Sebby took me for a spin in this one once: my first P-51 ride (again, from what I recall)! That was back when John owned it.

Always wondered whatever happened to it. Glad to see its still in the air!
William Addison
I helped John Marlin rebuild it, when I worked at Reliable Ind. I was lucky to get a ride when it was finished. A great experience.
Case Closed! 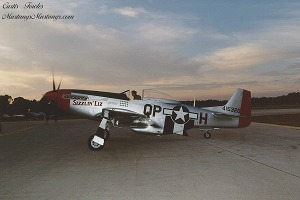