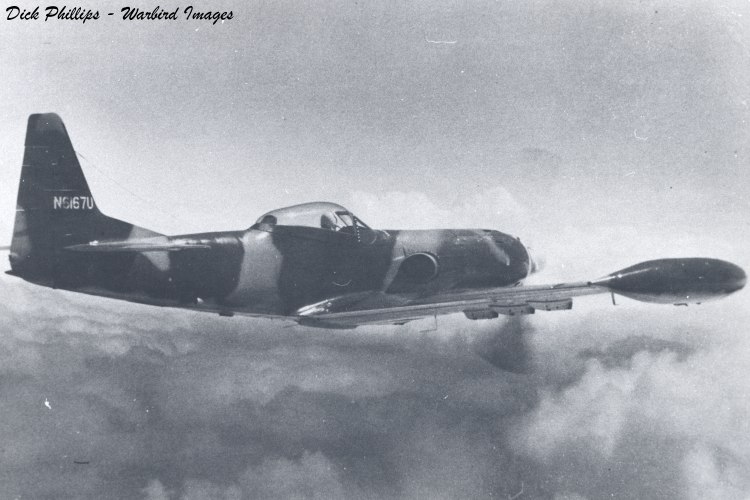 The airplane was indeed sold to Piper in '70, and was subsequently rebuilt as the Piper PE-1 Enforcer N201PE. This aircraft is currently in non-flyable storage.

Note that this airframe is NOT one of the two PA-48 Enforcers which are currently at the USAF Museum or Edwards AFB.

Curtis Fowles
Thanks everyone. This enforcer was built from a P-51D. I do not know which P-51 was used. Randy's post was the first I've heard that it was from parts, but I have no info to dispute that and Randy is doing a lot of Cavalier history. The reg. of N6167U assigned to 44-63775 has a few problems. According to one source, the MACRS for 44-63775 shows it destroyed in Hawaii in 1945 for starters.

The 2nd issue is that I don't believe this P-51 / enforcer became N201PE. I believe that it might have become the other Enforcer prototype N202PE which crashed in 71 (or never became anything). The reason is that N201PE is a TF model. It has the left-hand exhaust for the Lycoming T55 and has 5 hard points per wing. Records say that Piper used a P-51D and a TF-51 for their 2 enforcer conversions in 1971. The fact that this pic of N6167U is not a TF is why I think N6167U became N202PE ... OR ... there was actually another P-51D converted to the other Lycoming T55-L-9 TP at Piper which became N202PE. Granted, a TF could have been converted from N6167U, but I'm not buying that right now.

What we think we know:

(The 2 production PA-48 Enforcers are not P-51s (although they look like it somewhat) so we should not confuse them with Case #265 at all.
N481PE is restored for display in Ohio.
N482PE is waiting for restoration at Edwards AFB.)

Now I would like to find a correct serial # tie up for N6167U, GN 100 if possible. I need all you experts to help with that.

Dave Chamberlin
As of March 2004 one of these aircraft was still in outdoor storage at Edwards AFB just up the road from the F/A-22 CTF facility.
Ray Bazo
There were four Enforcers built by Piper. The first two in Vero Beach and the second two in Lakeland, FL. The two in Lakeland were designed to take two 30 MM gatlin guns with one mounted under each wing. Dave Lawrence and Larry Lee were the pilots that flew them and completed the flight test for the USAF at Eglin. The USAF did not want anything to do with them from the start but were told to shut up and evaluate the Planes.