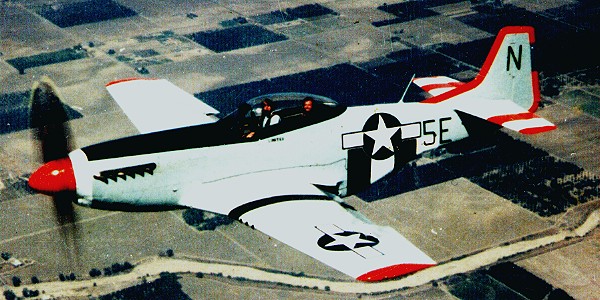 OK. This one is a bit strange, but here goes.
(with the help of TJ and a little book work of my own -no guarantees)

In 1987 Wayne Meylan took ownership and in June '87 he was killed in this mustang when it crashed and was destroyed. It was still on USCR in '96, but this N# is not registered anymore.
MustangsMustangs
As for the paperwork loose ends ...

Out of all of this we had 4 serial #s, 7 or 8 N#'s, 2 mustangs that crashed/dest. and another that was reported destroyed. It is believed that there is only one P-51 that survives all of this but I don't know for sure how much is metal or paper. Someone out there knows the real story and the current status.

Please help tie up the loose ends!
MustangsMustangs
At the time of the above photo, the P-51 has been positively identified as N31248, 44-73423.
MM.com
Marcia Sebby Winborne-Graven
Regarding the Mustang "Tally Ho" that my brother Fred Sebby used to fly. Fred told me once that particular mustang was not easy to fly. He said it was sold to 2 airline pilots and at the time he predicted they'd crash it because "they had no respect for how you fly a mustang". Sure enough, a few months later, they did crash it. According to Fred, they overloaded the plane and tried to do a roll on takeoff. He said it killed them both and destroyed the plane. I have a clipping of that accident that Fred gave me, which, unfortunately, doesn't have the year. But, it does say, "...Meylan and a passenger were killed in the crash of this aircraft on 26 June when the mustang apparently failed to recover from an aerobatic maneuver."

By the way, I don't think Fred ever owned the gray mustang in the other photo, but that's him flying it. I have several photos like that one.

Bruce McEwen
I was visiting Luddington , Michigan on July 21, 1987 and witnessed the flight of two mustangs. The first was "Gunfighter II" and the second was "Tally Ho".

they were both stored at the local airport and were warming up when I came by. "Tally Ho" had a noticable rough engine compared to "Gunfighter".

They both took off and I photographed them periodically. After a while they returned to the airport and I got several more shots of them on arrival and after landing.

Several days later there was an article in the Cleveland Ohio "Plain Dealer" regarding the accident, which killed a former Cleveland Browns player and an airport employee. There is an accident report on the FAA website that describes the crash.

I have since seen the "Gunfighter at the Columbus, Ohio air show.

k collins
I had the pleasure of flying in "Tally Ho" (N3278D), behind Gerry Miles in 1986, one year before it crashed. It was painted in the British "FB" colors and it was immaculate. We flew out of Chino, CA and crossed Lake Mathews at about 50 feet at over 300 mph. A chandelle on the other side of the lake produced 3.5 g's in the climb. It was a spectacular ride and Gerry Miles was both a nice guy and a heck of a pilot. He always spoke highly of Fred Sebby whom he considered a close friend.

Charles Irvin
Isn't this the same P-51 that Fred had to do an "entertaining" dead-stick landing in??? (dodging powerlines, cars, buildings, and pedestrians)I believe it was in Kern County somewhere.

I recall seeing the newspaper article in his hangar at the Compton Airport. The photo jarred my memory: with the exception of the Air Races, I haven't been near any Warbirds since about the time of Fred's passing, but I remember seeing pictures of this plane.
Charles Irvin
I just re-visited this site, and stumbled across the photo of this aircraft as "Tally Ho II": last time I saw Fred in a P-51, it was this aircraft, in that color scheme. However, it was before the name Tally Ho II, the number 51, or the nose art had been added. He flew it into/out of Compton Airport the day that I saw it. (I kind of recall that he had it there for a few days)

On a side note: there's a park at the west end of Compton Airport, that has tennis courts. The courts are located right at the eastern end of the park, along Central Avenue, across the street from the west end of the 25 Runways. Fred loved to buzz them as he departed the airport - so low, that he often had a majority of the P-51 in-between the light poles at the tennis courts, as he flew over the park!

I may know a little more info on this aircraft. As Fred's sister mentioned above, I don't know if Fred ever actually owned this aircraft, though he was known for being a "wheeler/dealer" in P-51's and parts, I know that several passed through his hands.
jerry miles
I can answer ant questions regarding any mustang I owned and fred flew all u have to do is ask fred was my best friend the brother I never had he loved thre thinks in life great sexy wiman, p 51, and 67 or 69 cougars to sell and P T 19,his passon was flying Reno, and Oshkosh he was close friends with Pall poberenski, im older but not senile email me with any questions regarding all p 51 I owned
joseph orbi
Trying to get Jerry Miles email address. Have questions for him.
Stacy Zimmer
If Bruce McEwen still has photo's of Tally Ho and Gunfighter taken at the Ludington airport I would love to see them. Wayne Meylan was my uncle, and I still remember getting the call on the day of the crash. He was an amazing man.
Case Closed! 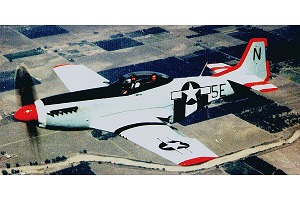