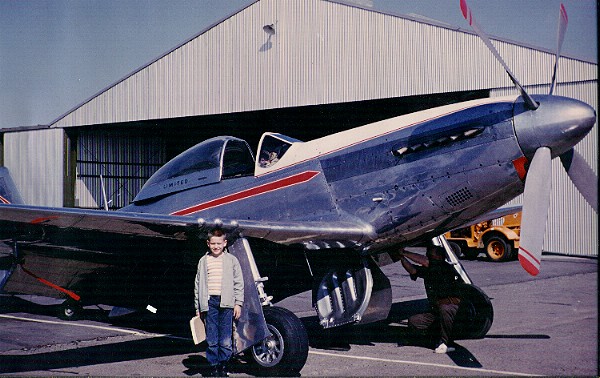 << Case # 28
Who?   Case # 29
Case # 30 >>
P-51 Who? Viewer Responses
MustangsMustangs
Lowell Thompson sent this photo in (he's the little guy by the right gear) and helps with this info. His father remembers this as Sherm Cooper's N5445V (they knew Mr. Cooper because he was their family dentist). Along with Sherm Cooper's P-51 on the field was N5438V, 44-74923. See the April 1972 issue of Air Progress (a full story on Cooper and a color photo spread showing his collection in front of the same hangar can be seen on pages 36 &37). BUT in the text it says, "He...kept eyeing a beautiful polished F-51 that was based on the field." (This is 1963) "When he heard of a Mustang for sale at Willows, he offered its owner his Swift plus some cash and became the owner of a warbird. He flew the fighter home, and that's where his education began. The Mustang, a little shabby all over, had a sick engine. So with the help of a friend who knew about Merlins, Cooper pulled the engine out of the fighter." "There she sat," grins Sherman, "out on the ramp in the rain with oil dripping and hoses and wires hanging out of the engine cavity while the other F-51 on the field sat polished and gleaming in its hangar. My patients, who knew I owned a Mustang, would come into the office and say, 'Boy that guy who's got that beat-up Mustang out in front is really in bad shape, but yours looks real good inside the hangar.' I didn't dare tell them any different."

So, is the nice and polished P-51 in this photo Dr. Coopers? Or is it N5438V which was owned at the time by JJ Wolohan and then Hawke Dusters of Modesto, CA? Lowell Thompson says that the photo is either '63 or '64. Cooper bought the mustang in '64, and if it needed engine work and lots of polishing, this very well might be N5438V.

Another case that needs a little more work...
Bill Eaton
A plausible explanation is that it was the Hawke Dusters airplane. Bud Fountain, who was, I think, the owner of Hawke Dusters, flew an F8F-2 in the early 1970s that was highly polished with similar bright red trim.
Jim Church
I think your photo shows P-51D-30-NA, 44-74923, c/n 122-41463, which at the time would have carried the registration N5438V. It wound up in El Salvador, where it served as FAS 410. It came back to the U.S. in pieces, and was restored, adopting the identity of 44-11353 in the process. It has since carried the registration N132, N100DD, N345 and N6395. The late John R. Sandberg owned it in the early '80s, and it was raced at Reno as #28, 'Tipsy Too.' It suffered an engine failure and crash landing at Reno '83, while being flown by Chuck Hall. It was then owned by Gary Levitz, who also raced it, but changed the name to 'Miss Ashley,' race #38. Levitz won the Gold Final in this basically stock P-51 at Reno '88. The last I had heard of it, it was being crated for eventual shipment to Europe.
Lowell Thompson
T.J. Johansen was very kind to send me a period photo of N5438V and everything seems to match, thus solving a very old mystery. Now if we can just find a period photo of Sherm Cooper's shabby P-51! Anyone out there have one?
MustangsMustangs
Thanks Jim, Lowell and T.J. for solving this one.
MustangsMustangs
This P-51 has been positively identified as N5438V, 44-74923
MM.com
Chris Taylor
My dad will be able to solve this,he worked for Bud.I played as a kid in both Bud and Sherm's mustangs. Bud's was all polished and Sherm's was a very soft blue with white on top of fuselage in front of cockpit with a bit of gold trim when I was around. Bud purchased his in 66 for 6,000.00 with a spare engine if I am correct, I will get a hold of my Dad tomorrow who at 70 is in his 39th ag flying season, taught by one of the best, Bud Fountain. This is a real cool site! Chris Taylor
Dennis Wolohan
This is the 51 owned by my late father, J. J. Wolohan of Livingston, CA. The location shown is its home field, Merced airport, where it shared a the hanger with his D18 Beech, among others. He sold the plane in 1966 to an acquaintance, Bud Fountain. He also sold a spare engine he paid $2,500 for in the early 60's. When my brother & I took a break from helping polish we'd sneak a little driving time on the yellow tug in the background.
martha hawke
Wondering if any one has any info on my grandfather Edwin Hawke who started Hawke Dusters. Thank you.
randy
i remember this i grow up in riverbank calif and bud would fly this bird all over the riverbank and oakdale area and yes he did own hawke dusters
Paul Addison Wilhite
I worked for Bud Fountain and Pappy Dunlap in the mid 50's as an assistant while I went to the Ceres Union High School. Pappy and Bud were partners but Bud Bought out Pappy because Pappy had broken a blood vessel in is eye and could no longer fly because he could not pass the physical to renew his pilots license.
They owned several planes then including two PT 17 Stearmans one for pleasure riding and the other for crop dusting. They also had a Navy trainer. I don't remember ever seeing a P 51 there at the hanger in Modesto.
Later in the late 60's and early 70's I heard about Bud Fountains Gold Coast Air show and he flew in the Reno Air races several times. I was not living in the area of Modesto anymore so it was out of site, out of mind. I know that from my experiences with Bud He was a real dare devil and could make his planes do some incredible stunts. I used to ride with him and we would fly over to the Oakdale area near Riverbank and he would practice crop dusting over his Fathers Peach Ranch. He would fly so low the wheels would be hitting the top limbs of the trees, as I observed. He also used to take me up to about 10,000 feet altitude and perform acrabatics like the hammer, butterfly, outside roll, inside roll, upside down , etc. He used to say to me he wanted to separate the men from the boys. He rode a big Indian bike to work every day.
Bud was killed in the Reno Airshows about 1976 (correct me if I missed the date) in his P-51 D fighter plane from WW2. He was landing when suddenly the engine caught on fire and it was so intense and was burning right into the cockpit that he lost control and crash landed right in front of the crowd. I suspected fowl play because Bud was also his own mechanic and he kept his planes in excellent condition. So if anyone knows the details of that I would like to hear about it. Thank You
Torry Kirksey
I worked for Bud Fountain in 1964 and 1965. I remember things differently that what I have read on this site. Would like to have contact with anyone interested.

Torry Kirksey
541-899-5561
Curtis Fowles
According to the Reno Air Races Database, Bud Fountain raced a Bearcat in 1969 and 1983 - no listing of Fountain racing a P-51D. His P-51, the one in the photo at the top survived and did race at Reno under different owners. The FAA Database does not have a fatal P-51 crash listed until Bill Speer died in 1994.

I could not find Bud Fountain listed as owner of any other P-51 in MustangsMustangs database. If we are missing something, please let us know.
Larry Perkins
Walter "Bud" Fountain bought the Mustang from Dr. Wolohan for $8,500.00 in 1965. I had looked at the Mustang the day before for another party who tried to buy it for $8,000.00.

I told Bud that Dr. Wolohan's Mustang was for sale for $8,500.00. He went down to Merced the following day and bought it. The purchase price included a spare engine and a ground power cart.

Bud flew the Mustang out of Modesto, California for a few years then disassembled the aircraft. The Mustang was still disassembled when Bud sold it, possibly to John Crocker.

The Gold Coast Airshow would practice over our field just off of Parker Rd. and Dewitt Rd. I got to ride with the two of them many times and it made me want to fly. So in high school I got my ticket by training out of Hawke. The announcement of the death of Bob Hoover today made me look up Bud's name as he introduced me to Bob when I was in junior high school. I have many fond memories of watching the planes as I grew up outside of Modesto.
Morris bibens
Bud Walter Fountain did have a P-51. Flew it over the house on tully rd. when I was 6 or 7. He took it all apart in a hanger out at modesto airport. He was by dad's best friend and they owned a stearman together. Mom made dad sell his interest to bud. All of dad's flying buddies, Bud, pappy, clyde parsons and others died flying. I was named after bud's father.
Jim Rayl
Bud Fountain was my uncle, my mother's brother. I worked for him during the summer when I was in high school. I loaded Sulphur and flagged for him when he, Jack Sperry and Don Taylor sprayed. It was a treat to see them fly and as someone earlier noted, seeing how low they flew over the treetops. Many times, people would stop on the road and watch them. One of my more memorable moments was when he was in the P-51, he circled the strip at the ranch and then buzzed it at about 50 feet above the ground. It was an unbelievable sight as he flew by and then did a slow roll as he ascended. I saw his acrobatics many times in the "Candy Kid". Bud, Jack and Clyde were tremendous pilots with 1,000's of hours of flying but it just goes to show anything can happen. We all miss him. He was one of my first heroes. Someone wondered earlier if Bud had any children. He had one son, Jerry Fountain, who still resides in Denair.
Case Closed! 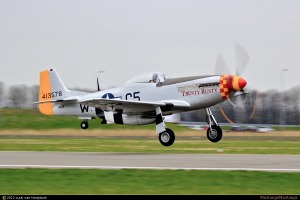