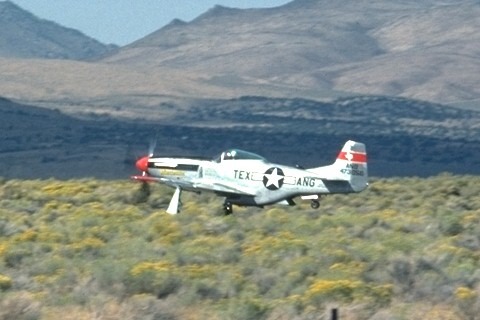 Mr. Messick sold this aircraft in the early 1980's to Charles Knapp who was the CEO of what was American Savings and Loan, Inc. Knapp operated this aircraft which had the registration number of N51MR and s/n 44-73163 until it sustained substantial damage in 1989 . Bob Guilford was flying the aircraft at the time of the accident when a partial loss of engine power was encountered while departing from Santa Monica, CA. For details regarding the accident , see NTSB Accident Report #LAX89FA295 (date: 09-02-89).

The wreckage was obtained by Doug Kempf ( a captain for Alaska Air) ,and two of his brothers, shortly after the accident. The aircraft has been undergoing a lengthy restoration since the early 90's . Doug has built numerous aircraft and was a contender in the Biplane Class at the Reno Air Races in previous years.

It will be nice to see another Mustang back to life when the Kempf Brothers have it completed !
Mike Meek
N51MR ex Charles Knapp, now with Randall Kempf for rebuild after crash in Santa Monica.
Mike Shelton
Looks Like old minute man, which i think was owned by Ed Messick...think it was damage badly landing short at santa monica some years ago....fate i am sure others can fill in if i am correct ...ps..looks like Reno is the location for this photo
Joe Bruno
I flew in that aircraft back in the early 70's. Both with Ed and another gentlemen named P. D. Straw. It was the first aircraft that I did a loop in. It went with us to the bicentennial in Colorado Springs. I think Ed scraped a little off of the wing that year up in Amarillo. Winds are notorious out there...
Hank DiGiovanni
I was crew chief for Ed Messick in the '70's. Maintained this P-51 Minute Man, N51MR, 44-73163 and P-51 Gunfighter, N5428V, 44-73264, along with the rest of his 'fleet.' During that 1977 RENO Race, one of the main bearing cap studs snapped. I didn't even know about it until the next oil change when I found half of a washer stuck in the oil screen. Found the nut and broken stud (with cotter pin still in place) in the bottom of the oil pan. The bearing cap and case were galled but that wonderful engine just kept on running. As for the wing tip scrape, we taped bicycle training wheels on the wingtips for the Colorado Springs show. Ed thought it was funny (I think). And a back seat ride with P.D. Straw was always an adventure. Joe Bruno got his first loop and I got my first inverted parabolic dive.
Anthony Coelho
P.D. Straw was Major General Paul D Straw of San Antonio Texas. This plane was his all time favorite.
Case Closed! 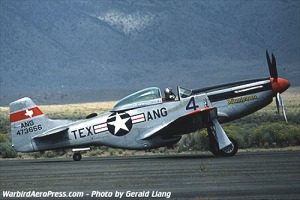