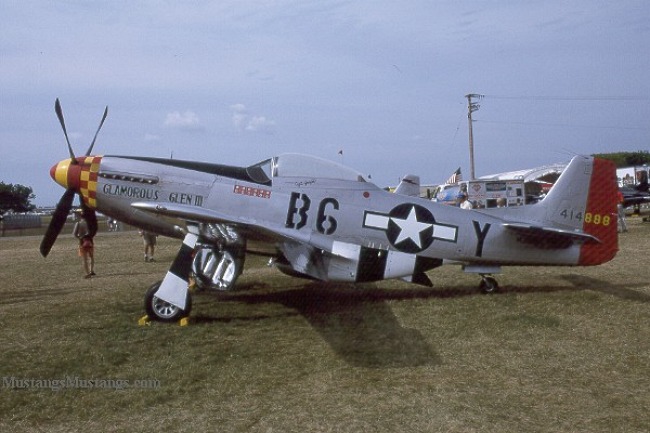 Due to financial problems, my dad had to sell the Undertaker in 1974. Selling price at that time was $54,000. Not a bad profit from the original $15,000, however, I wish we could have kept it. I was lucky to get many flights in the airplane, but I wish that it could have remained in my family long enough so I would have gotten a chance to fly it.

2001: 6th September "Glamorous Glen III Crashed":
45-11381, N551CB, owned by Gary Honbarrier was being flown by Jeff Michael (owner of 44-74936 "Obsession") on Thursday, 6th September, when the P-51 had cooling problems and lost power. After being vectored by ATC to the nearest airport, the engine totally quit, sending them (Jeff and Butch Cauble) through the cloud deck. They came out at about 1200'agl and the plane was clear so they jumped! They are lucky to be alive from a very low altitude jump.

The P-51 was on its way from Salisbury to Springfield, Ohio for a private 357th FG reunion. They filed an IFR flight plan (we don't know if they were in any actual IFR conditions except for the emergency descent). The Charlotte tower received a radio call saying they had engine overheating trouble. They were then vectored to Lincoln County Regional Airport (IPJ). They couldn't make it after losing all power, going down six miles east of the airport, at 11:20AM.

Not all warbird pilots wear parachutes when just flying around, but many do when going cross-country. In this case, being able to parachute to safety was certainly the difference between life and death.