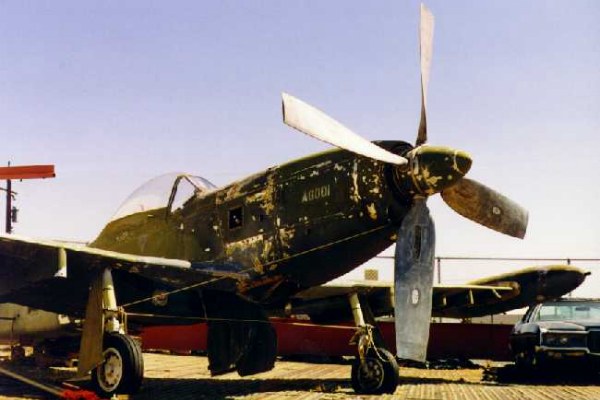 << Case # 122
Who?   Case # 123
Case # 124 >>
P-51 Who? Viewer Responses
Dave Hackett
Sure looks like the Piper Enforcer to me.
Flt Lt Stewart Staudinger BEng RAF 230 Sqn RAF
I hope I can be of some help. The aeroplane shown is the surviving one of two Piper Enforcers built in the early 1970's under the direction of David Lindsay (founder of Cavalier Aircraft). The other was lost in a crash. In the early 80's he had two more built (N482PE and N481PE) and were ferried for storage at Davis-Monthan in August 1984. The reason I believe the aircraft shown in the photo is the surviving of the earlier pair is due to the markings on the RH side of the nose. These were not present on the dark green paint scheme of the later pair. I hope I'm not talking BS here but it'd require a bit more research to confirm. However, I'd be surprised to be too far off the mark as there are only three aircraft it could be.
Michael Saunders
This is a Piper PA-48 Enforcer, Registration No. N482PE. It's currently at the Air Force Flight Test Center Museum located at Edward AFB in California awaiting restoration. It's sister aircraft, N481PE, is currently on display at the Air Force Museum in Dayton, Ohio. Quoting from Joe Baugher's website (home.att.net/~jbaugher1/p51_14.html) here's a brief history of the aircraft: "...the Cavalier company decided to sell the rights for further development to the Piper Aircraft Corporation, and cancelled any further work on the re-engined Mustang project. On November 4, 1970, the Dart-powered Mustang prototype was delivered to the Piper factory at Vero Beach.

At that time, the US was embroiled in the Vietnam War, and combat experience indicated that there was a need for a low-cost, high-performance close-support aircraft for use by foreign air forces obtaining MAP assistance. This project was given the name *Pave Coin*. In pursuit of production contracts under the *Pave Coin* program, the Piper company undertook a more ambitious Mustang conversion effort. One single-seat F-51D and one two-seat TF-51D airframe were fitted with the 2455 s.h.p. Lycoming T55-L-9 turboprop engine. The project was given the name *Enforcer* by Piper. The first Enforcer conversion was flown on April 19, 1971. Later that year, the USAF evaluated one of these Enforcers and confirmed the original performance claims, but did not show very much enthusiasm for the project.

Even though the USAF never saw any use for the Enforcer, Congressional pressure led eventually to a contract in September 1981 for Piper to construct two new prototypes for evaluation. They were known under the company designation of PA-48. The two PA-48 prototypes were given civilian registrations rather than military serial numbers, and were never given any military designations.

The PA-48 Enforcer bore only the slightest resemblance to the F-51D--only ten percent of the parts were in common. The fuselage was lengthened by 19 inches aft of the wing and larger tail surfaces were fitted. Power was provided by a Lycoming T55-L-9 turboprop. The familiar trademark Mustang ventral scoop was completely removed, and a large turboprop exhaust was fitted on the left-hand side of the fuselage just ahead of the cockpit. A Yankee rocket ejector seat was fitted in the single seat cockpit. Provisions for wingtip tanks were made, and ten underwing hardpoints were fitted. The fixed wing-mounted guns were removed, and all gun armament was carried within underwing pods. The two PA-48s first flew on April 9 and July 8, 1983 respectively, and the USAF conducted its evaluations at Elgin AFB and Edwards AFB during 1983/84. Gross weight was 14,000 pounds. Maximum speed was 403 mph and cruising speed was 363 mph. Service ceiling was 37,600 feet and combat radius (with two gun pods) was 469 miles.

The PA-48 Enforcer was unsuccessful in obtaining any production orders, and both prototypes were put in storage by the USAF in late 1986. One of them (N481PE) is now on display in the Annex building at the WPAFB Museum in Dayton, Ohio."

I'm currently looking for information on the Cavalier and Piper variants, if there's anybody at your website that might have information, I would appreciate if you could let me know. Feel free to contact me at this address or at lbms15@snet.net.
Linda Alexander
The Piper Enforcer.
Roger Price
This is actually not a Mustang. It is the Turboprop driven Piper Enforcer which Congress forced the USAF to evaluate in the early 70's. The tip tanks, multiple hardpoints and missing belly scoop identifies this as the Enforcer. My guess is this photo is of the Enforcer before it was sent to be restored at the USAF Museum at WPAFB. Enforcers were not Mustangs, but were completely new airframes. Too bad the "Gas Shortage" hit, or maybe Piper would have gone commercial with these! Oh but to dream!
James Grant
I think this is the Piper Enforcer project of the late 70s or early 80s. If it is it's basically a turboprop on a Mustang Fuselage.
Olivier Lacombe
This is what I believe to be a Piper Enforcer, a Modified F-51D used by Piper in a contest to win an order for COIN aircraft. The project was terminated and the aircraft was disposed of. It was powered with a Allison turbine of about 2000+ SHP (I may be wrong, but I know I am close). Just look at the width of the blades and at the strange spinner. There was a huge round exhaust on the port side of the aircraft and it was equipped with tip tanks and underwing pylons.
Ryan Wright
I'm no genius but it looks like an Enforcer!
Robert Lindsay
Case #123 is not one of the first Enforcers (N201PE and 202PE). It's one of the 2nd batch. One can tell the difference by the different wheels, bomb racks and tip-tanks. All these items are different on the first aircraft.
MustangsMustangs
From the information we have and with the help from someone involved in the Enforcer program, this one is from he second batch which would make it N482PE.
Nicholas Coutches
1 of 2 Piper Enforcers made as prototypes in 1970
Jim Tilburg
Sure looks like the plane I flew tactical test flights at Eglin AFB. Met or exceeded all test parameters but the pentagon did not want this cost effective replacement for the A-1. Dream to fly and performed super.
Don Bille
I was the head electrician on the two original Enforcers built at Vero Beach, Fla. I can't reply to all the E-mails on the web, but I try! The original two Enforcers were converted mustangs, so if you wanted a model of these, just use the dimensions of the P51. What we did was: remove the old engine, mount,radiator and air scoop. Installed the turbo, motor mount, exhaust pipe and new starting electric system. Install a new canopy,an A-1 prop,and a small ventral fin to replace the scoop. We added a partial instrument panel behind the pilot and a cam-corder,(the latest thing). The aircraft already had tip tanks,bomb racks and guns in the wings.
Brian cook
The photo appears to be one of the piper mustangs built in 1981 and flown in 1983. Appears to have 10 hard points and g2 wheels and brakes. If you would like info on the enforcers you should e-mail my father (Tom Cook) at theairfield@ hotmail.com . He was the program manager on this project at vero beach. the piper enforcers had little in common with lindeys originals which were conversions of actual mustangs. The piper enforcer was designed and built from the ground up to handle the additional horsepower and flight loads at 14000lbs.
I remember the day they hooked the wing up to the waffle tree for stress analysis and the beams in the hanger ceiling started bending before the wing deflected!!!!
Any way I'm sure he would answer questions as he's retired and still enjoys discussing the enforcer.
Brian Cook
Howard L Hart
Worked at Piper Aircraft Corp from 1975 to 1986. Gave up my position as supervisor in 1983 to work as one of the aircraft mechanic on the PA 48 Piper Enforcer. Federal Aviation Administration registration number N481PE. Have picture of first one of two built, with the crew, copilot and pilot that worked on her. If anyone interested contact me. luckyexpressone@yahoo.com