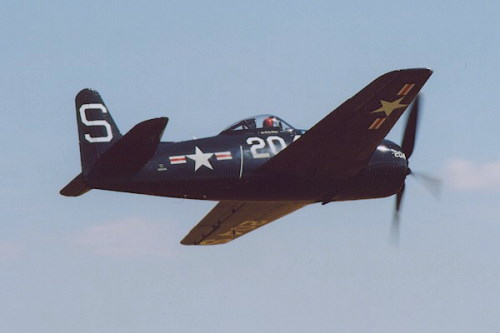 The Bronze Unlimiteds
story and photos by Curtis Fowles

Don't be fooled into thinking that Bronze is for slow people. Turning laps of 360 mph is not going slow or loafing. Remember these speeds are around a course, not in a straight line. The aircraft is almost always turning at high speed-bleeding, g-pulling bank angles.

Bill Anders in #68 Val Halla qualified at 352 mph but developed a problem on Thursday and Friday. Bob Hannah in #5 Voodoo had to fly the bronze heat on Friday for cutting the deadline on Thursday. He took first in the Friday heat at 379 mph. Bill Anders dnf on lap 1 as well as Bill Rheinschild in Risky Business. Jimmy Leeward in Cloud Dancer finished 2nd, with Stu Eberhardt in Merlins Magic at third. Saturday saw Bill Rheinschild (in his Sea Fury this time) finished first at 385. Stu Eberhardt and Ike Enns, both in P-51s finished 2nd and 3rd.

4th - John Bagley #47 P-51 placed 4th with a speed of 346 mph. He flies one of the P-51s that Bob Hoover used to fly at airshows around the country, "Ole Yeller". Get up close and you can see that Bob Hoover autographed the rudder. John qualified at 357 mph.

5th - William Anders #68 P-51 Val Halla finished at 329 mph after having troubles during the week. Anders did not finish two of the heat races.

9th - David Price flew his sand camo P-51 "Cottonmouth" #49 to 9th place finish at 279 mph. He qualifed this P-51 at 336 mph. This is another Southern Cal Mustang and is part of the Santa Monica Museum of Flying.