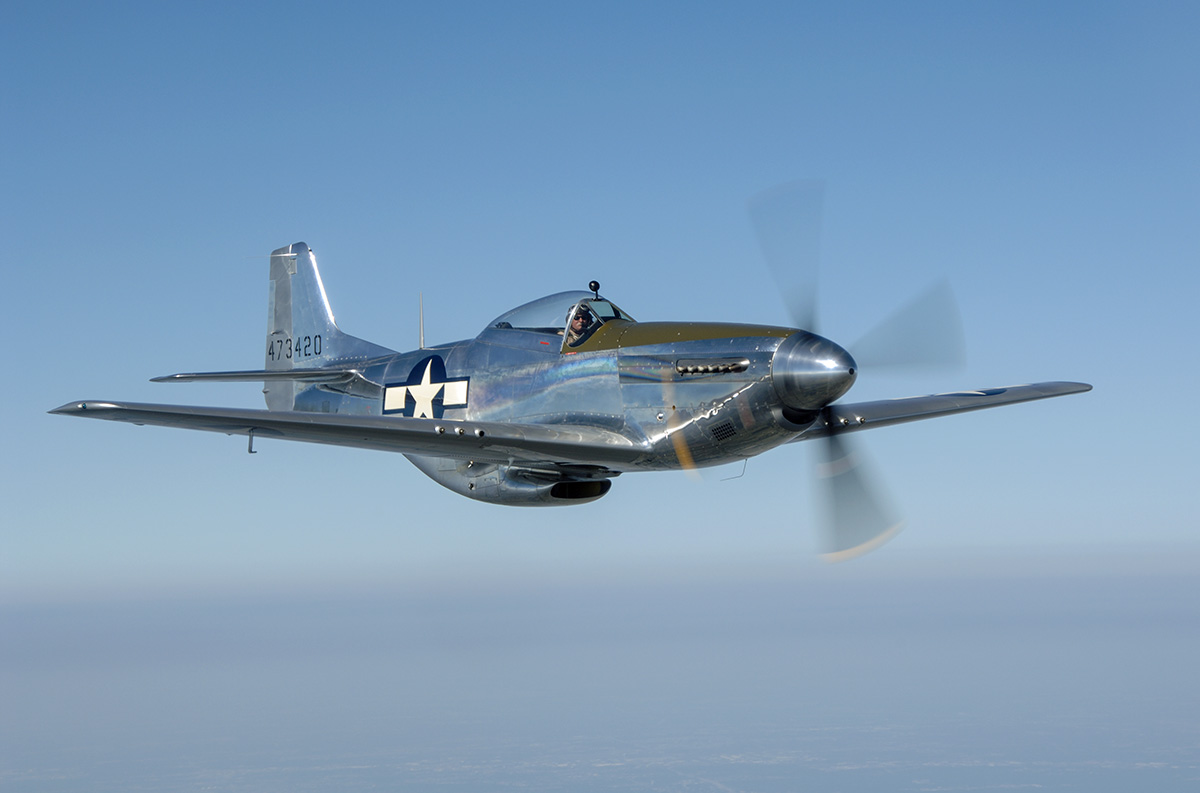 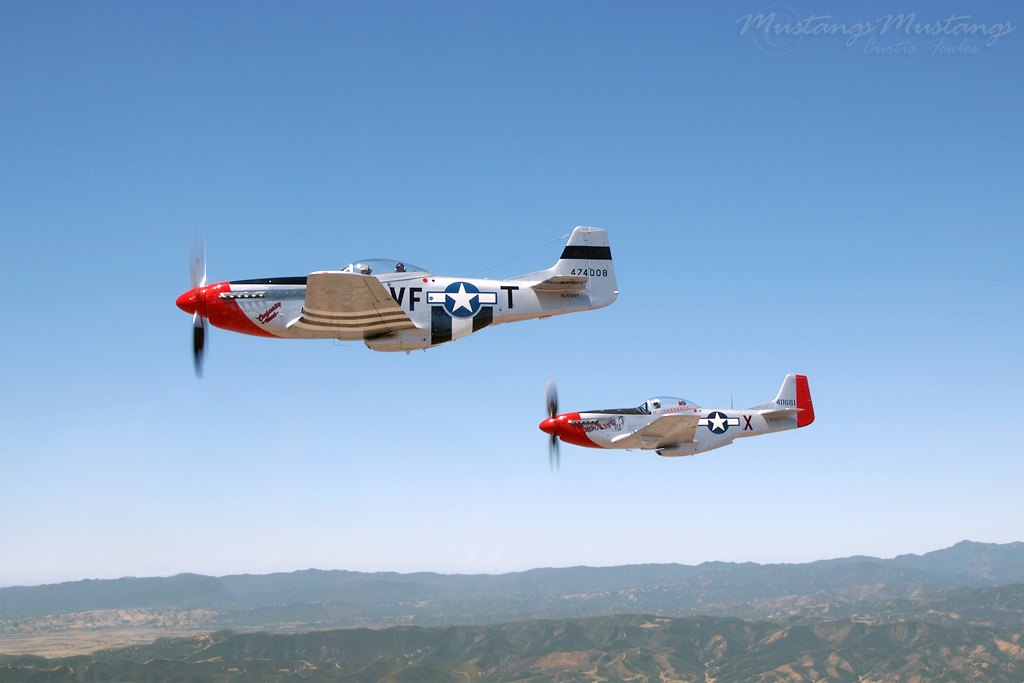 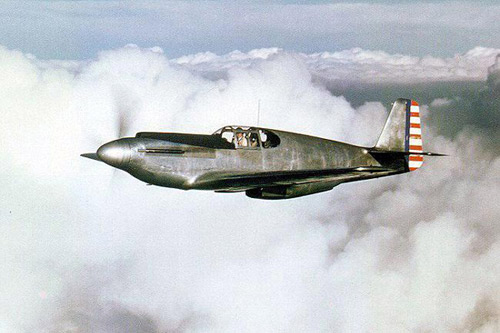 P-51 History - from the beginning. The players, the company, the demand, the problems, and the results.

The iconic section at MustangsMustangs

P-51 Survivors
P-51 Mustang Survivors
The list of existing P-51s today as we count them. Serial#s, registrations, names, owners, home base, status and images. Updated as new information comes in. The most heavily traveled section at MustangsMustangs. Listed in Serial # order.
P-51 Who?
P-51 Who?
P-51 Who? approaching 400 cases! Test your aviation memory and knowledge. Can you identify these P-51s? Send us your '50s, '60s, '70s, & '80s P-51 images. One of the most popular (and fun) sections of MustangsMustangs.
P-51 Variants
P-51 Mustang Variants
Descriptions of the development and production of the North American P-51 Mustang with little history thrown in. A-36, P-51, P-51A, P-51B, P-51C, P-51D, P-51K, P-51H, Mustang I-V and the lightweights, P-51F, P-51G, P-51J. Over 15,000 units produced in a very short time. The North American Aviation factory and staff were put to the test during World War II.
P-51 Images
P-51 Mustang Images
A very large collection (over 9000) of P-51 images from WWII to today. Military Images, Civilian Pics, Air to Air Photos, Sepia / Black & White, MustangsMustangs, Nose Art, Wallpapers. Great set of images from readers around the world.
P-51 Aces of World War II

P-51 Aces.
A tribute to those brave men who fought hard in WWII and put their country and comrades first. And not just the fighter pilots. Crew chiefs, ground personnel and the WASPS also deserve much praise for their hard work.

These men are part of a generation that is considered to be the greatest of all time. Links to "Aces in a Day", "Top Aces" and the full list plus some individual aces history. Some of these great men are still around today, attending air shows, signing books and meeting with fans. Many are flying west each year as they enter their 90s - give them the thanks and respect they deserve.

P-51 Mustang in World War II:
The bombers of the daylight missions were taking very heavy losses each day from Luftwaffe pilots until an escort fighter could stay with them deep into enemy territory and home again on every mission. The North American P-51 Mustang was the immediate choice. The bomber crews nicknamed them their "little friends."

WWII: It was decided by Allied commanders that a full time strategic bombing campaign would 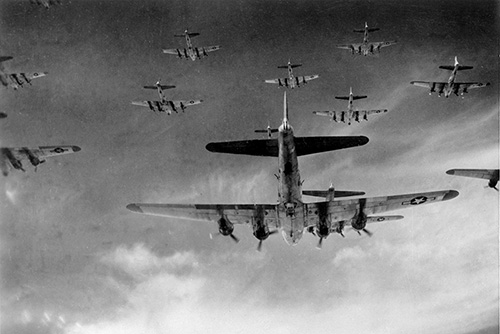 cripple the enemy over time and allow ground troops the advantage they needed to first stop the advancing German Army and then push them back into Germany. This included the practice of daylight bombing raids on German targets. The 1st daylight bombing mission by a US unit was on 4th July, 1942. Two out of the six RAF A-20s were lost. On 17 August 1943, 60 out of 376 American bombers were lost!

Almost all the losses coming beyond the range of the bomber escort. Early escort included the RAF Spitfire and the USAAF P-47 Thunderbolt. Even with drop tanks, the range of these fighters would barely reach to the Germany border. After that, the Luftwaffe, laid in wait.

14th October of 1943, another 60 were lost in a single day, "Black Thursday". The B-17 had a crew of 10 men. Many did not get out and if they did get out and get their chute to deploy, evading capture and returning to England was very difficult. At that loss rate, the practice of daytime bombing raids was in question. The B-17, although designed to defend itself, could not. Strategic day-time bombing was crippling both sides.

It should be noted that the concept of the P-51 Mustang began more than three years before the first daylight bombing missions and the heavy losses. It is often accepted that the P-51 Mustang was designed to be an escort fighter, but as you look at the timeline, it is more plausible that the Mustang, as a fighter aircraft, fit that need better than any other fighter available. By the time heavy bomber losses were at hand, the P-51B and P-51C, with outstanding range, were already in production and being delivered to bases in England.

Part of the US approval in 1940 for export to Britain was that 2 examples of the Mustang would be turned over to the USAAF for evaluation at no cost. In 1941, the USAAF was not too interested in the P-51, taking their time with the XP-51 trials, but now they are very interested. General Hap Arnold was instrumental in pushing the P-51 into the escort fighter role. The USAAF sent a directive to NAA to provide maximum range to the P-51B for fighter escort at the earliest possible date. The P-51 already had the longest range of any Allied fighter. An 87 gallon fuselage fuel tank behind the pilot was added to some of the B/C models and all of the D/K models to fulfill this directive.

It all started in 1939, when the British needed more fighter aircraft. They showed interest in the Curtiss P-40 Warhark and the Bell P-39 Aircobra among others. Neither were their first choice, but that was the best that the Americans had and the British could not wait for any new designs. 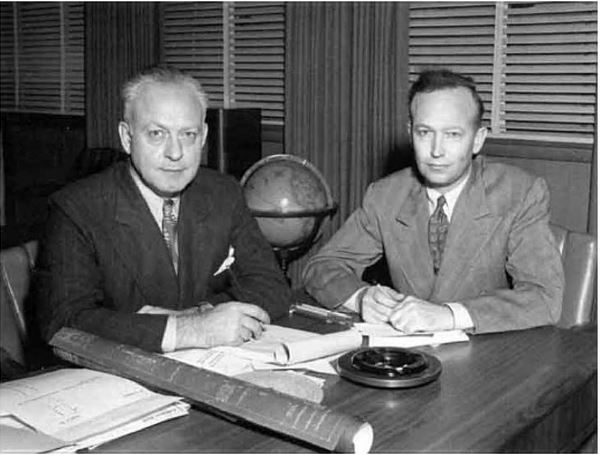 They decided the P-40 would be the one. James H. "Dutch" Kindelberger, president of North American Aviation, was approached by the British to build the P-40 at the North American production facility because Curtiss Aircraft was at full capacity. Kindelberger told the British that it would take 120 days to tool up for the P-40. Then Kindelberger somehow, with no real evidence that it could be done, convinced the Sir Henry Self of the British Purchasing Commission, that North American Aviation could design and build a new fighter that was better than the P-40. The new fighter would fly faster, higher, farther, be more maneuverable and pack more firepower.

After 78,000 man hours and 102 days later, the prototype, NA-73X, rolled out of the hangar - without an engine. 18 days later, the Allison V-1710-39 was ready and on 26 October 1940, NX19998 took to the skies for its maiden flight with test pilot Vance Breese at the controls. On 9 December 1940 the British Purchasing Comission sent a letter to North American Aviation stating that the NA-73 airplanes have been given the official designation of "Mustang".

The P-51 Mustang is credited with providing very effective long range bomber escort. The Allied daylight bombing campaign proved extremely successful by strangling the support lines of the enemy and nearly stopping the production of war-time machinery. The P-51 Mustang and the men and women that dreamed, designed, built, tested, ferried, maintained and flew them in combat saved lives in the skies and on the ground. Who would have thought, back in 1944, that this escort fighter would still be flying 75 years later? The Mustang was built for the highest performance with less thought for longevity. With the hard work of warbird fanatics around the globe, about 300 P-51s still exist today with about half still airworthy! A few of the remaining P-51s ( Survivors) have the distinction of serving for more than 30 years with 4 different Air Forces around the world!

The P-51 served in many different air forces around the world. It served during peace and during hostilities - to stop the Nazis during WWII and in the famed "Soccer Wars" in 1969. 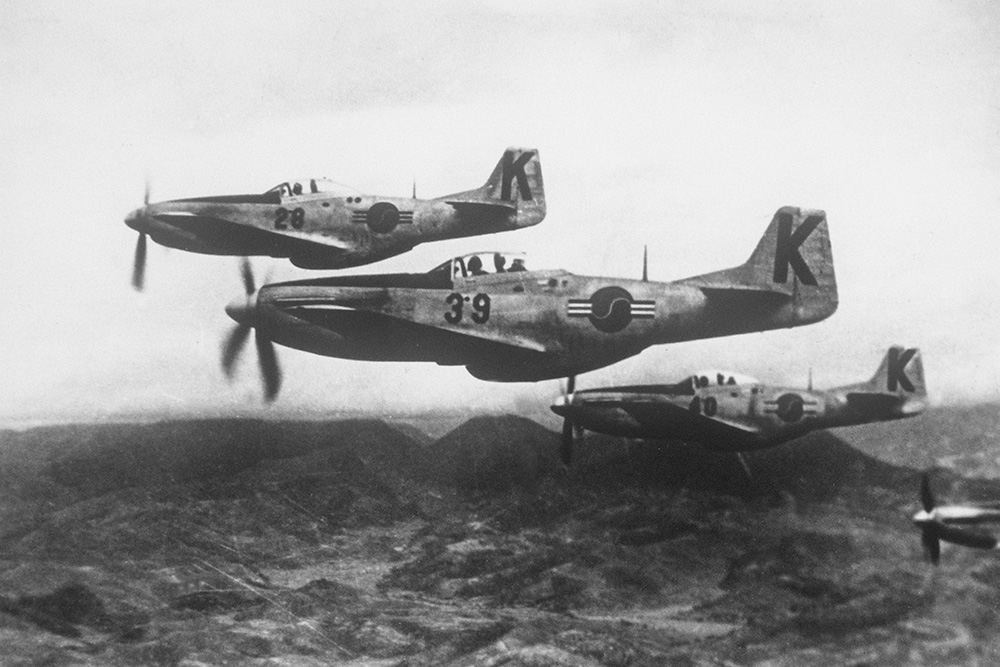 The Mustang flew and fought in Korea during the early 50's and in many other smaller conflicts. In all, at least 25 different countries operated the P-51 Mustang for more than 35 years!

The P-51 was designed and built in the USA but not because of any US contract or requirement. The British were responsible for hiring NAA to produce a new fighter, and NAA then designed the Mustang to meet RAF requirements - but the design was all NAA. The RAF received early shipments and flew various models of the Mustang throughout the war.

Canada: WWII - flew the P-51 within RCAF squadrons of the RAF. After the war, RCAF received 100 mustangs that remained in service until 1956 where many of them came into the US civilian market.