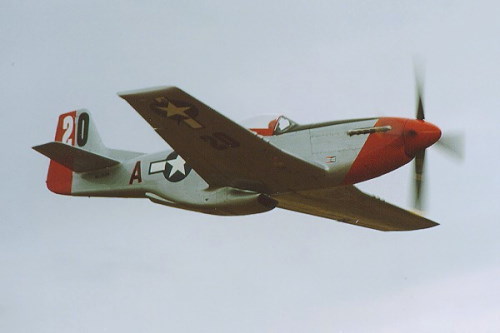 The Gold Unlimiteds
story and photos by Curtis Fowles

Gary Levitz, 61, fell victim to racing's unforgiveness during the Saturday heat race. Just off pylon 1 his highly modified racer suffered structual failure and broke apart in flight. Several pieces fell into a residential area in Lemmon Valley east of Stead Field. Levitz, a 30 year race veteran, was killed. Gary's fellow race pilots showed their poise and professionalism by finishing the race during all of the ground activity after the crash. The NTSB has a preliminary determination that the tail empenage failed in flight causing the aircraft to break apart. The races will not be the same without him. Our thoughts and prayers go out to his family, friends and crew. Thanks to Gary and the Miss Ashley II crew for the many years of racing.

The loss of Gary Levitz casts a dark cloud over the races and in the pits, but the races will and do move on. No pilot would have it any other way.

Rare Bear had sucked a bird in the Friday heat that caused big trouble in the radial. They got it going again, but found metal in the screens after running Saturday and an early morning Sunday test flight. The Bear is out. Expect the two top P-51s to go at each other for the Gold.

On Sunday, the match up between Tiger in Strega and Dago Red's pilot Bruce Lockwood is coming. After the loss of Levitz on Saturday, Destafani and Lockwood had a good race and to their credit stayed focused and raced fast with speeds around 460 mph. Tiger crossed the line in first, 4 sec. ahead of Dago Red. Tiger has the pole for Sunday and that is big for the Strega Team. Brian Sanders in Dreadnought, Tom Dwelle in Critical Mass, Dan Martin in Ridge Runner and Matt Jackson in Rare Bear all follow Dago Red and Strega.

Sunday's race began as Tiger and Lockwood busted out together and flew formation racing with Bruce Lockwood in Dago Red just behind and to the side of Tiger in Strega. They did this for 7 plus laps! No one else is even close. During the final lap, with the win just around a few more turns, Tiger had to make the infamous call "Race 7 is a mayday". The Dago team yelled loud as Bruce Lockwood in Dago Red, is all alone in 1st place with only 1/2 lap to go. The power comes back and Dago cruises to victory. Steve Hinton worked with Tiger to get him down safely. Brian Sanders, back about 36 sec. takes second, while Dan Martin in Ridge Runner III takes a very cool 3rd place at 410 mph. This was a very exciting race with a truly surprise finish.

1st Place: - Bruce Lockwood pilots #4 Dago Red for the back-to-back wins in the gold unlimited in 1998 and 1999. This year they finished at an average speed of 472.33 mph, the second ever fastest winning time! Bruce qualified at 479.237 mph. Great flying by Bruce and excellent work by the crew.

2nd Place: - Brian Sanders in #8 "Dreadnought" finished 2nd in the Gold clocking in at 441 mph. He earlier qualified at 445 mph. Dreadnought is a fast racer and this 2nd is a great finish.

3rd Place: - Dan Martin qualified the week at 438 mph! Wow, and this is not a full-time racing machine. Although you wouldn't know it by how fast it was going. The transformation begins in late July and then this P-51 returns to stock shortly after the air races. Dan finished third in the Gold Unlimited on Sunday at 410 mph. Nice work Dan and crew. I'd like to see a full-cut racer in the hands of this pilot.

8th - Bob Hannah (moved up from 1st in Silver) flying Bob Button's Voodoo. This team had their share of problems this year with an engine and propeller change during the week of racing. Bob qualified at 376 mph. He won the Silver at 427.889 mph and then placed 8th in the Gold at 350.83 mph. Check out the flashy new paint job. They also have a very colorful pit area.

9th - Tiger Destefani flying Strega pulled out of the gold race with problems during the last lap, lap 8. Not far behind, Dago Red, in 2nd place at the time, took over first place and won the gold. If you stay close and stay healthy, you will have a chance to win. Strega sports a new look this year along with a complete rebuild in 98/99. Tiger qualified at 479.62 mph! Everyone was anticipating this showdown. At the time of the mayday, Tiger was smoking the course and poised to win. Afterwards, he comments "that's racing".

It is always nice to see a mixture of unlimited racers. This year, like last year, the P-51 Mustang came out on top. There is always a little fighting going on about which aircraft is fastest - the Mustang, Bearcat, Sea Fury? I like the Mustang of course, but I'll have to admit that when Rare Bear came by it sent a deep roar right through you. Had the Bearcat been healthy and Strega held together, we would've had one heck of a close race. This type of racing is as much or more about finishing than about top speed.