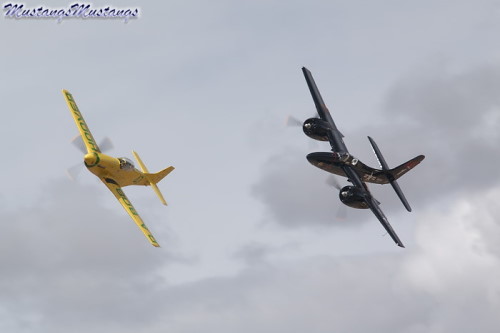 The Bronze Unlimiteds
story and photos by Curtis Fowles

Ok, here we go with the unlimiteds. The bronze might not seem very exciting, because of the slower speeds, but there was some good racing to watch. And when you got at least 1500 hp blowing by you real close, everything is good. As you get up to the Gold, that hp will double and then some. Speeds in bronze are not slow, just slower and will usually be anywhere from the low 300's to over 400 mph. Joe Thibodeau busted through the 400 barrier on Sunday with a win at 408 mph! That speed surpassed many in the next fastest race, the Silver Unlimited. That's pretty fast for a full winged P-51. Remember that the racers are almost always turning (you know, left, low and fast) at Reno. Level speeds would be even higher.

Some of these racers moved up to the Silver during the week, others moved down from Silver. Merlins Magic ended up in Bronze on Saturday because they did not race on Friday after an engine change from a dnf on Thursday. On Friday, Miss America dnf on lap 4, but they were able to get back into the Silver race on Saturday and post a good time at 440 mph.

Sunday was cold and cloudy but at race time for the Bronze the weather was not a huge problem, other than everyone was wondering how much worse it would be later. You were seeing lots of gloves and warm hats on. Anyone wearing shorts was obviously drinking heavily. The racers spread out a little after the first 2 laps. Joe Thibodeau ran smooth and strong the whole race pulling down 1st place at 408 mph. In the pic at the top of this page, John Bagley in the P-51 Ole Yeller #47, was battling with Michael Brown in the Tigercat. Brown ended cutting a pylon a getting a 12 sec. penalty. Here are the results:


The 2004 Bronze Unlimited race week ended the with some good safe racing. I hope some of those P-51s can bump up to silver next year. It is tempting to think that high 300's is just cruising in the P-51. But I know several of the racers are very serious and doing everything they can to get some extra speed. The high 300's is a fast race time for a stock P-51 airframe with a merlin that is probably not stock :) The only way to go faster is to get a full-blown race merlin and shim it around a bit, put on some race wingtips, hang on and fly smooth and don't blow the thing up. I know ... if it was that easy, everyone would be going 450 plus.